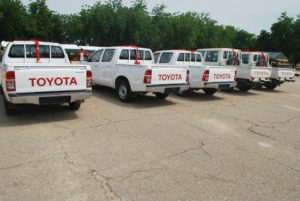 The fight against insurgency in the North East is receiving popular support as Toyota Nigeria Limited (TNL) recently donated some Hilux vans to the Multinational Joint Task Force (MNJTF) in Maiduguri. Receiving the donation, Nigeria’s Chief of the Defence Staff (CDS) General Abayomi Gabriel Olonisakin expressed profound gratitude to the management and staff of TNL describing the company’s gesture as a show of public support and approval for MNJTF actions. “This donation is a laudable one and very timely, too. This shows that the fight against Boko Haram insurgency will come to an effective end going by the presidential directive. The provision of adequate security, not only in the northeast, but in all corners of the country is a task that must be done and done quickly too”, he said. The CDS, who was represented at the occasion by Air Vice Marshal Olutayo Oguntoyinbo promised that the Hilux vans would be used to ensure success of the operation against all forms of guerrilla movements and cross-border crimes around the Lake Chad Basin. While charging soldiers to make maximum use of the vehicle he urged other companies and corporate organizations in Nigeria and countries around the Lake Chad Basin to emulate Toyota Company in this noble gesture calling on all Nigerians to come forward and support the Nigerian Military in the ongoing campaign against terror. In his own remarks, Chief of the Army Staff (COAS), Lt-General Buratai stated that the vehicles will be used to most effectively to achieve the three mandate of MNJTF which include, defeat of the Boko Haram terror group in all the area they occupied. “The Hilux van would be put to most effective use for the achievement of the three mandate of MNJTF namely, to defeat the insurgents in all the countries they exist whether in Nigeria, Niger Republic, Chad and Cameroon, and to facilitate the humanitarian and logistics needs of troops in the conduct of their duties by providing escort and security for them. “The vehicles would also be used for the distribution of materials to IDPs and to re-establish state authority to create safe environments for those displaced to come fully back to their villages and continue with their day-to-day activities”. The COAS described the action of TNL as a very important role in the realization of the presidential directive of routing out terrorists in three months adding, that in addition to using the vehicles for patrol purposes, it will also be used to escort humanitarian support aid to IDPs and to re establish civil authority by conveying them to their villages. TNL’s Managing Director, Mr Kunle Adeojo said that all members of his management board are agreed to support the Armed forces through these vehicle donation, saying that fighting against insurgents needs the support of all nations and all companies. “Doing this is a worthy cause indeed for the singular fact that businesses and potentials can only be fully maximized in a safe and secure society. That is why Toyota company reckons that the crusade against insurgency deserves the support and solidarity of all hence the donation of this pick-ups to aid your operations”.  The managing director further saluted the courage and doggedness of the Nigerian military as it champions this campaign. Present at the occasion were the Chief of Army Staff, Lt Gen Tukur Buratai, the representative of the Chief of Defence Staff and Chief of Logistics at the Defence Headquarters, Air Vice Marshal Olutayo Oguntoyinbo and MNJTF Commander, Major General Iliyasu Abba.  Others were the General Officer Commanding 7 Division of the Nigerian Army, Major General LO Adeosun and several senior military and para-military officers.                                                                                     Colonel Rabe AbubakarActing Director Defence Information
PRNigeria encourages institutions to be transparent in their information management as it provides news items from authoritative sources for free use by the media