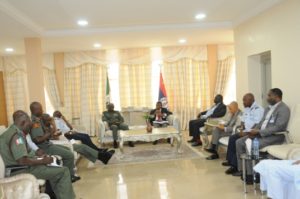 To deliver on the presidential directive of ending Boko Haram by the year’s end, Chief of the Defence Staff, (CDS) General Gabriel Olonisakin has asked the Presidential Committee on the Proliferation of Small Arms and Light Weapons to urgently implement the modalities to stem small arms proliferation in the country.
The CDS urged the committee to pursue the agenda to a logical conclusion adding that it is very imperative for the committee to avail itself of the opportunity of collaborating with the armed forces institutions in furtherance of their mission.
The Committee, which was set up in April 2013, was designed as a rallying point in the efforts of government to stem the rise in the small arms importation into the country to ensure the implementation of the international protocols endorsed by Nigeria and other ECOWAS member countries.
Speaking earlier, the committee chairman, Ambassador Gabriel Imohe told the CDS that his visit was to seek ways to foster mutual working relationship with the military with a view to working with existing security agencies to build synergy and curtail the incidences of illegal importation and use of small arms and light weapons. He noted that the Committee has since created institutional framework in Nigeria to tackle the issue in accordance with ECOWAS Conventions recommendations in small arms and light weapons.
Commenting on the cooperation so far received from the military the chairman said, “We can all collectively put all hands on deck in the very important effort to stem the tide of illicit proliferation of small arms and light weapons. We have enjoyed goodwill among all security agencies and we solicit that this good relationship be sustained”.
Committee members are drawn from notable federal ministries and departments relevant to the regulation of small arms and light weapons. 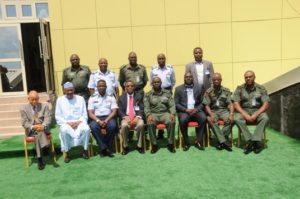