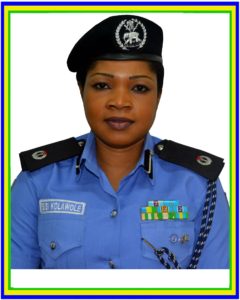 In a bid to boost the ties between the Nigeria Police Force and the members of the public, the Force Public Relations Officer, Ag. ACP Olabisi Kolawole in her maiden meeting with the Police Public Relations Officers (PPROs) of States, Zonal Commands and other Police formations, urged them to cooperate with journalists, as well as making themselves easily accessible to members of the public with a view to achieving effective policing operations and robust Police public relations. The maiden meeting of the Force Public Relations Officers with the Police Spokespersons at the State commands and formations took place at the International Peace Keeping Hall, Force Headquarters, Abuja. She reiterated to the PPROs to make the policy trust of the IGP a priority and ensure positive attitudinal change of their officers and men.
The Force Spokesperson equally appreciated members of the public for their supports to the Nigeria Police; she further enjoined them to know their neighbours and also not to relent in their efforts at ensuring that they report any suspicious person or persons in their area to the nearest Police Station.
Ag. ACP OLABISI KOLAWOLEFORCE PUBLIC RELATIONS OFFICERFORCE HEADQUARTERS
PRNigeria encourages institutions to be transparent in their information management as it provides news items from authoritative sources for free use by the media