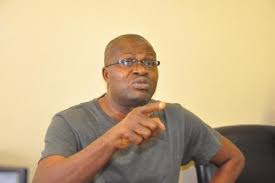 Emmanuel Osita Okereke, director general of the National Task Force to Combat Illegal Importation of Small Arms, Ammunition, and Light Weapons, NATFORCE, has been declared wanted by the Economic and Financial Crimes Commission, EFCC, for jumping bail.
Okereke, a former presidential aspirant under the platform of the Nigerian Liberation Party, NLP, is being prosecuted by the EFCC on a six-count charge of impersonation, forgery and obtaining by false pretence.
He was arraigned on November 21, 2013 before Justice J. Y. Tukur of the FCT High Court, Apo, Abuja for allegedly forging a document of the Federal Government titled “Restricted, Federal Government of Nigeria, National Task Force”. He alleged falsely held public offices as DG and director, FCT Command of National Task Force, through which along with Ishmeal Chinyere Nwogu, he fraudulently obtained money from sale of employment forms.
One of the charges read: “That you Osita Okereke and Ishmael Chinyere Nwogu sometime in March, 2010 in Abuja within the judicial Division of the High Court of the Federal Capital Territory knowingly had in your possession a forged document titled ‘RESTRICTED, FEDERAL REPBLIC OF NIGERIA, NATIONAL TASK FORCE’ with intent to defraud, fraudulently used same as genuine to induce the public to believe that your organization is an agency of the Federal Government of Nigeria and consequently remitted the aggregate sum of N1,145,000 to you through First Bank account number 3066173170 and thereby committed an offence and punishable under section 368 of the Penal Code Act Cap 532 Laws of the Federation of Nigeria (Abuja).”
Justice Tukur had granted the request of his counsel, Kanayo Okofar, requesting that he be granted bail.Okereke, who was arrested with several incriminating items, including bullet proof vests, has however, jumped bail and is currently wanted by the EFCC.
He allegedly operates a syndicate, which maintains offices across the country, defrauding unsuspecting members of the public, by selling recruitment forms for N5,000 in the guise that they would be offered job by the federal government.
The EFCC enjoins members of the public with information on the whereabouts of Okereke to contact any of its offices in Lagos, Abuja, Port Harcourt, Enugu, Gombe and Kano, or the nearest police station. Wilson UwujarenHead, Media & Publicity