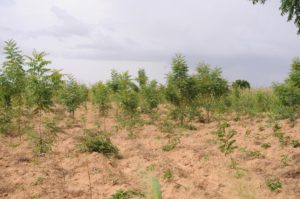 The Sokoto State Governor, Aminu Tambuwal has commended the National Agency for the Great Green Wall.
Tambuwal who made the recommendation when he received the DG of the NAGGW and his entourage in his office recently said he is impressed by the scope of work so far embarked on the GGW projects in sokoto state.
He said the project is a direct benefit for the people of the state adding that sokoto state has no choice but to support and embrace the programme. He noticed with dismay that some states are advocating the scraping of the Ministry of Environment but assured that his state will continue to have a ministry of environment.
He said even before the creation of the NAGGW, sokoto state saw a reason to re-enact a bill to ensure the control of desertification.
He appreciated the selection of sokoto state as one of the states to benefit from the Food and Agricultural Organisation (FAO). He assured to address the issue of land allocation both in the state and the Local Government Areas.
In his earlier speech, the DG, NAGGW Mr Goni Ahmed said over 70 million Nigerians have experienced the negative impact of drought and desertification indirectly or directly.
He said sokoto is one of the states chosen as one of the focal points for the GGW project under the FAO saying that sokoto is under intense pressure from the menace of desertification that will result to environmental degradation and increased poverty if not tackled.
He thanked the Governor for the support to the Agency by ensuring that the bill for the creation of the Agency was passed when he was the speaker of the House of Representatives.
He solicited for support from the state government in the provision of land for the GGW programme and the establishment of state and local government committee in line with the GGW Act.
The team who also visited a project site at Unguwar Lalle in Sabon Gari LGA of the state were impressed by the progress made so far. In Unguwar Lalle community, 6km of shelterbelt, 2 hectares of Orchards and 1 hectare of community nursery has been established and doing very well.
The Head of Afforestation in the Agency, Mr Segun Babatunde Akinola said that the Agency is receiving maximum support of the communities as they have come to understand the importance of the project and its benefits. He said the communities choose mostly the species of economic trees which they will benefit from the profit.
Alh Sule Maigari the Mai-anguwar (Community leader) praised the efforts of the Federal Government for the provision of boreholes and trees planted. He said both community and their livestock’s are benefiting immensely from it. He regretted an incidence where some hoodlums came and made away with the submersible Engine used for pumping water to the tank. He said that because of the incidence, both men and the youth now take turns in guarding and protecting the borehole sites.
He advised other communities along the GGW corridor to guard jealously this very laudable project and equipments the government has put in place for their benefit.
Larai Daze
H (Press and Public Relations Unit), NAGGW