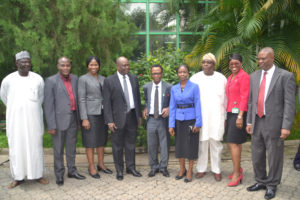 The Managing Director/Chief Executive Officer, of the Federal Roads Maintenance Agency (FERMA), Engr. Gabriel C. Amuchi, FNSE, bows out as the Agency’s Managing Director, having completed his tenure.
The handover over ceremony took place at the Agency’s conference room yesterday 21stSeptember, 2015.
Amuchi was appointed by the former President Goodluck Jonathan on the 6th of September, 2011 with six executive directors. During the course of the ceremony, Amuchi said he was proud of his team as the percentage of road failure decreased significantly with good number of Nigerian roads being motorable.
He however, lamented that during his tenure, the Agency witnessed a drastic reduction in budgetary provision for road works. He then called for an alternative and improved funding for the Agency to enable it meet up with the expectations of Nigerians.
Continuing, he said he is taking responsibility of all that had happened during his administration and asked for forgiveness from whoever he might have unintentionally wronged in the course of discharging his duties.
Engr. Amuchi handed over to a transitional executive management committee with Engr. Peter Odeh Ibu, as the Acting Managing Director/CEO; Engr. (Mrs.) B. A. Ilemore, Ag. Executive Director, Road Maintenance Management Services (RMMS); Mr. Joseph O. Oyinloye, Ag. Executive Director, Administration and Human Resources Development; Mr. A. D. Ahmed, Ag. Executive Director, Planning & Engineers Services; Engr. J. A. Olawoye, Ag. Executive Director, West Operations; Engr. Taiwo O. Koya, Ag. Executive Director, East Operations, and Mrs. Fatimah Okei, as the Ag. Executive Director, Finance and Accounts.
While responding, the Ag. MD/CEO, Engr. Peter Odeh Ibu, commended the outgoing MD/CEO and his team for working satisfactorily despite daunting challenges. He assured Nigerians that the attention of his team would focus more on fixing critical inter-state roads nationwide.
Maryam M. Sanusi (Mrs.)
AGM/Head (Comm./PR)