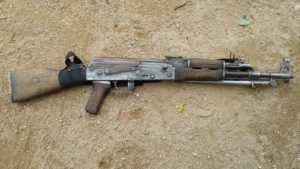 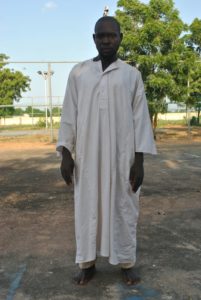 In an offensive operation to clear Boko Haram terrorists enclave around  Kwatarha and Torikwaptir general area of Gwoza Local Government Area of Borno State, a notorious Boko Haram terrorist that had been wrecking havoc among  the communities was gunned by our troops on Monday afternoon.
During the operation 4 other terrorists were believed to escape with gun shot wounds. An  AK-47 rifle was recovered from him.
In a related development, troops of 3 Division have arrested a suspected Boko Haram terrorists group kingpin, Alhaji Tijjani Usman Damagum. He was tracked down and arrested at Damagum town, Yobe State yesterday. A high profile Boko Haram terrorists’ group member, he has led Boko Haram members on various attacks especially in Yobe State. The suspect is currently undergoing interrogation with a view to arraign him soon.
Please disseminate this information to the public through your medium.
Thank you for your usual cooperation.
Colonel Sani Kukasheka UsmanActing Director Army Public Relations
PRNigeria encourages institutions to be transparent in their information management as it provides news items from authoritative sources for free use by the media