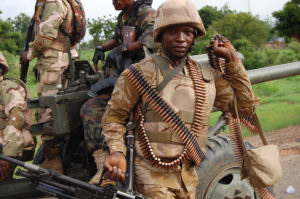 Troops of OPERATION LAFIYA DOLE have ambushed and killed  2 fleeing terrorists as well as captured several weapons and supplies yesterday.
The troops who laid the ambush at the Boko Haram crossing point into Sambisa Forest at Iza, engaged the terrorists who succumbed to the superior firepower of troops and fled. At the end of the encounter two of the terrorists were killed, some abandoned their supplies and fled, one general purpose machine gun and one AK47 rifle were captured. Other items abandoned by the terrorists were  three bicycles, provisions including maggi, potash, peanut and onions.
Kindly disseminate this information through your medium.
Thank you for your usual cooperation.
Colonel Sani Kukasheka Usman Acting Director Army Public Relations
PRNigeria encourages institutions to be transparent in their information management as it provides news items from authoritative sources for free use by the media