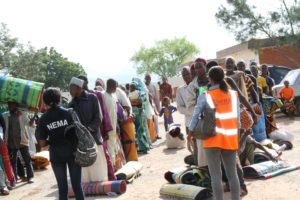 The National Emergency Management Agency (NEMA) at the weekend received 197 Nigerians that were displaced by the crises in Central African Republic (CAR) who have been taking refuge in the Republic of Cameroun under the International Organization for Migration (IOM).
Director General of NEMA Muhammad Sani Sidi who received the returnees in Sahuda border post near Mubi in Adamawa State said about two years ago following the escalation of the crises in the Central African Republic, the Federal Government through NEMA had evacuated its citizens through the airport, these could not be reached because they had crossed over to the Republic of Cameroun.
He said under international charter which Nigeria was signatory, the Nigerians were free to decide when to return back home especially given the cover of the International Organization which had opened camps for them in that country. According to him, as IOM was closing the camps and informed the Nigerian government of the development by transporting them to the border,  NEMA was mandated to receive them there on behalf of the Federal Government.
The Director General of NEMA who was represented by the Director of Search and Rescue Air Commodore Charles Otegbade said the returnees were fully screened by the security agencies at the border before being received by NEMA and even escorted to the reception point by the military and police.  With logistic arrangement  put in place by NEMA, they were immediately catered for and fully transported to their various homes across 12 states. He gave the breakdown of the returnees per state as follows:  Adamawa (64), Bauchi(15), Kebbi (7), Sokoto (2), Gombe(16), Borno (40), Kano (13), Kaduna(1), Plateau(2), FCT (2), Yobe(29) and Taraba (6).
The IOM Chief of Mission of in the Republic of Cameroun,  Mr Roger Charles Evina who accompanied the returnees to Mubi, Adamawa State appreciated the cooperation of the Federal Government through NEMA in the prompt reception of the citizens. He said the closure of the IOM camps have led to the returning of all persons living there to the various countries including citizens of Nigeria, Mali, etc. Manzo EzekielPress OfficerNEMA Headquarters, Abuja