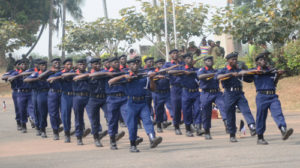 Responding to the recent bomb blast in Abuja, the  Commandant  General  of  Nigeria  Security  and  Civil  Defence  Corps (NSCDC),Abdullahi  Gana  Mohammadu  has  directed  the  Corps  personnel  to  be  extra vigilant in the discharge of their duty especially in the protection of Critical Infrastructure and National Assets. Gana Muhammadu gave the directive during inspections of scenes of  the bomb blasts  that occurred at Kuje and Nyanya Districts of Abuja Friday’s night.
He said: ” We must redouble our efforts in the provision of maximum security by becoming extra vigilant to deny undesirable elements from wrecking havoc on innocent citizens.”
While commending  the  timely response of agencies in addressing the plights of the victims of the explosions, the NSCDC boss called  for  greater  synergy,  partnership  and  collaboration  among  the various  security  agencies  in  tackling  security challenges in the country.
DCC Emmanuel OkehPublic Relations OfficerNSCDC HeadquartersAbuja
PRNigeria encourages institutions to be transparent in their information management as it provides news items from authoritative sources for free use by the media

How 16 Army Generals Were Unjustly Eased out of Service, Despite Malami’s Interventions

Troops Ambush ISWAP on Mission to Attack Military Base at Ngamdu