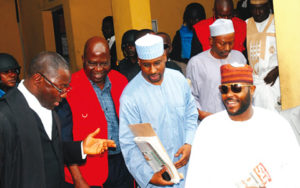 The Economic and Financial Crimes Commission, EFCC, on Wednesday, opposed bids by Mahmud Tukur and four other defendants, standing trial in a N1.5billion subsidy scam, to quash charges preferred against them.

The other defendants are:  Ochonogor Alex, Abdullahi Alao and their companies: Eterna Plc and Ax Energy. They are standing trial before Justice Lateef Lawal Akapo of a Lagos High Court sitting in Ikeja. At the resumed hearing of the matter on Wednesday, EFCC counsel, Rotimi Jacobs, SAN, prayed the court not to entertain the submissions of the defence team led by Olaniran Obehe to quash the charges against the accused persons.

He argued that: “The issue of prima facie case cannot be raised until the prosecution’s case is closed and that renders their applications premature. Whether the charge was amended or not, the facts and findings are still binding in this case. My submission is that the court should dismiss all applications and I urge my Lord to so do”

Tukur’s counsel, Obehe, alongside Ebun Adegoruwa and Aderemi Oguntoye: counsels to Ochonogor and Alao respectively, prayed the court to quash the charges against their clients. Adegoruwa had argued that the charges be quashed or alternatively strike out Ochonogor’s name from the charge, while Alao’s counsel described the charge as incurably cancerous. “I pray the court to discharge and acquit the accused as they cannot be tried under such incurably cancerous amended information”, he said.

After listening to the arguments and submissions of counsel, Justice Akapo adjourned the matter to November 16, 2015, for ruling.