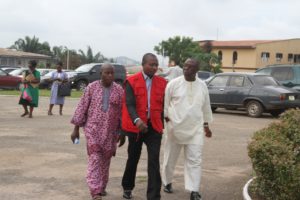 The Economic and Financial Crimes Commission, EFCC,  today October 8, 2015 arraigned the duo of Adebola Adeseye Idowu and Isiah Kayode Ajisafe before Justice M.L Abimbola of the Oyo State High Court on 16 count charge bordering on conspiracy,  stealing, abuse of office, and contract inflation.
The accused persons are alleged to have connived and used their positions as Executive Director and Chief Accountant, respectively, to defraud their former employer, National Horticultural Research Institute, NIHORT, of various sums of money amounting to N156 million. The money was allegedly stolen  by siphoning  staff  arrears during the implementation of 15% increments on consolidated emoluments and illegal deductions of 7.5% as pension fund. The accused persons were said to have pocketed N70,000,000 purported to be meal subsidy.
Also, the accused persons are alleged to have approved contracts beyond their limit of N50, 000,000 by splitting the contract valued at N123, 526,941.10 into three parts.
Further Investigation revealed that most of the contracts were awarded to companies which never existed.
The accused persons pleaded not guilty to all the charges.
Counsel representing the accused, J.A Badejo prayed the court to admit his clients to bail.Prosecution counsel Kayode Oni did not opposed the bail applications but urged the court to not accommodate the prayer of the defence counsel that the accused persons be granted bail on self recognition.
Justice Abimbola  granted the accused persons bail in the sum of N10 million each with one reliable surety in like sum.
The case was adjourned to 10th and 16th of November 2015 for the commencement of trial.
Wilson Uwujaren
Head, Media & Publicity