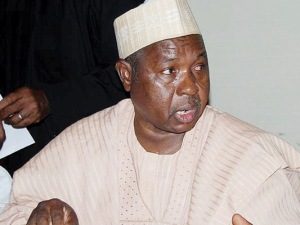 The Governor of Katsina State, Hon. Bello Masari has called for the proper registration and licensing of the locally made guns and other small arms in order to track them easily and prevent illicit flow of Small Arms and Light Weapons (SALW) that fuels state of insecurity in the country.
Masari made this call in Katsina State House when members of the Presidential Committee on Small Arms and Light Weapons (PRESCOM) visited him after a two-day Capacity Enhancement Training for Security Operatives in Two Selected Communities in Nigeria, organised with the ECOWAS, European Union (EU), and UNDP.
He also called for the update of the legislation and liberalisation of the laws guiding ownership of firearms in the country in order to be better able monitor their movement and usage.
He commended the works of PRESCOM in sensitising the border communities and security agencies, but noted that the often neglected locally made arms also constitute equally nagging security challenge
Earlier, the leader of PRESCOM delegation, Amb. Ghali Umar commended the governor the providing the enabling environment that ensured the success of the training programme.
Umar who represented the Chairman of PRESCOM, Amb. Emmanuel Imohe, also informed the governor that community leaders and security agencies at the border communities have been properly sensitised on how to improve security against illegal arms flow, drugs and human traffickers.
He said: “We came here to organise a programme on border communities and security agencies.
PRESOM was inaugurated by the President in 2013 and its purpose is to be the lead agency in the control of SALW in the country. Part of the mandate for this committee is to sensitise stakeholders on how we can tackle this menace. The Committee are conducting a survey to determine the amount of SALW in the country.
By PRNigeria
PRNigeria encourages institutions to be transparent in their information management as it provides news items from authoritative sources for free use by the media