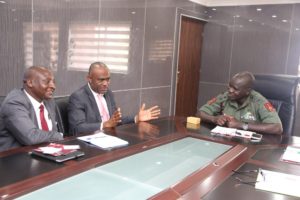 The Nigerian Army has been described as a force to be reckoned with at all times.  The Chief of Army Staff (COAS), Lieutenant General Tukur Buratai made this known when the Republic of Netherlands Defence Attaché to Nigeria, Colonel Eric Adriaan de Landmeter paid him a courtesy call at the Army Headquarters last week. General Buratai thanked the Defence Attache for the visit, emphasizing that the two countries have been participating in Peace Support Operations for a long time. He stated that the Multinational Joint Task Force has commenced operation, adding that troops contributing countries are expected to operate within their territories as well as assuring the Defence Attaché of the Nigerian Army’s determination to end Boko Haram activities soon. He further stated that Netherlands is a country with good innovations in many areas and commended them for expressing concern on the current security challenges facing the nation.
Earlier, the Defence Attaché thanked the COAS for the audience despite short notice and commended the Nigerian Army for their effort in the current fight against insurgency. He further stated that his country was interested in what is happening in Nigeria, stressing that Netherlands have the capacity to offer specialty in many areas to the country especially with the current security challenges facing the country.
In another development, the Managing Director (MD), Total, E&P, Nigeria, Mr Nicolas Terraz also led some Management Staff of the company on a courtesy visit to the COAS, Lieutenant General Tukur Buratai at the Army Headquarters. Speaking during the visit, Mr Terraz congratulated the COAS for his appointment and commended the Nigerian Army for protecting lives and property of the citizens. He   applauded the troops for the professional manner in which they are carrying out their assigned roles. The Managing Director stated that one of the major challenges facing the company is oil theft as well as pipeline vandalism.  Mr Terraz promised to ensure that the already existing cordial relationship between the company and the Nigerian Army is always maintained. Responding, the COAS thanked them for the visit, adding that the Nigerian Army and Total have been working closely for a long time. He commended the company for carrying out corporate social responsibilities in their host communities, urging them to continue in maintaining their excellent relationship with the people.
General Buratai promised that the Army will continue to ensure that troops deployed to protect their installations conduct themselves professionally at all times. The COAS added that challenges facing the country, including oil theft, piracy and pipeline vandalism in the Niger Delta as well as Boko Haram terrorism in the North East are being tackled vigorously, promising all these will soon be a thing of the past.  He appealed for support to the Nigerian Army in the fight against insurgency in parts of the country.         Similarly, the Management of Arik Air has solicited to partner with the Nigerian Army. The Managing Director of the company, Mr Chris Ndulue made this known when he led other Management Staff on a courtesy visit to the COAS, Lieutenant General Tukur Buratai at the Army Headquarters.He congratulated the COAS for his well deserved appointment and thanked him for the reception accorded him and members of his entourage.  The Managing Director prayed for a successful tenure for the COAS and wished him well in office.
Mr Ndulue commended the Nigerian Army for the professional manner they are carrying out their roles particularly in the ongoing fight against insurgency in the North Eastern part of the country. He described the Nigerian Army as efficient and effective in its operations, reiterating that the company will soon resume operations in the North East that was suspended at the peak of the insurgency.
Responding, the COAS, Lieutenant General Tukur Buratai, thanked them for the visit, promising that the Nigerian Army would partner with the company. He commended Arik Air for the professional manner in which they are carrying out their duties and called on them to support the Nigerian Army in the ongoing fight against insurgency particularly in the North East.
General Buratai further stated that the Nigerian Army is making a steady progress in the fight against terror and other form of criminalities, stressing that terrorism would soon be a thing of the past in the country.
Present during the visits were some Principal Staff Officers of the Army Headquarters, among others.
You are please requested to disseminate this to the public through your medium.
Thank you.
SANI KUKASHEKA USMANColonel Acting Director Army Public Relations