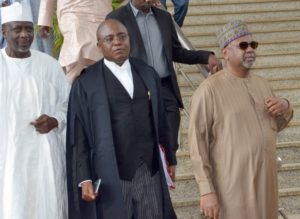 Justice Ademola Adeniyi of the Federal High Court Six, sitting in Abuja on Monday expressed surprise at the decision of prosecution counsel to bring additional charges against immediate past National Security Adviser (NSA) Col. Sambo Dasuki (rtd) on a day set aside for definite hearing on the one count charge preferred against him.

On September 1 this year, prosecution counsel, Mohammed Diri, had told the court that Dasuki was charged with the unlawful possession of firearms without a licence which Dasuki pleaded not guilty.
Justice Ademola then granted Mr. Dasuki bail on self-recognition but ordered that his passport and other travel documents be deposited with the deputy court registrar while the case was adjourned to October 26 and 27 for the hearing.
When the court sat today (October 26, 2015) however, M.S. Labaran, appearing for the prosecution announced instead that the one count charge was now being expanded to include additional charges bothering on possession of local and foreign currency in his Abuja residence and family house in Sokoto contrary to Money Laundering Prohibition Act 2011.
He also requested that the trial be conducted in secrecy by providing special cover for witnesses from using public routes; use of private witness room; use of facial masks; and also that only accredited members of the press be allowed to cover the trial.
Surprised with the wave of new motions, Justice Ademola asked Labaran if he was aware that Monday October 26 and Tuesday October 27, 2015 were clearly set for definite hearing of the case.
In a counter motion one of the counsels to the Dasuki and former President of the Nigeria Bar Association, (NBA) Mr. Joseph Daudu objected to the request for special cover for prosecution witnesses in the case on the ground that the case is harmless within a democratic setting that does not warrant secret trial. Daudu said that even during military rule, trial of this nature was held openly.
He insisted that in a democratic era, the entrenchment of rule of law will be the greatest casualty if trial of this nature is made in secret.
In a criminal trial, the ability of defence counsel to confront the prosecution witness is pivotal, he told the court because if the defence counsel is not allowed to have a direct confrontation with the prosecution witnesses and interrogate the witness as per his background and the like will weaken the strength of the defence.
After all he continued the identity of the witnesses which the prosecution sought to hide is already in the public domain. Therefore the prosecution seem to be urging the court to embark on mere academic exercise.
He said: “We consider the trial as harmless to the witnesses. If you make the witnesses anonymous then we may lack the ability to conduct background checks. Even trial of treasonable felony and coup d’tat the witnesses are not hidden and we are in a democracy.
“Also for the fact that there has not been cases in this court where witnesses are being molested and in this cases it will be a case of injustice if the defence counsel and witnesses are known and the prosecution witnesses who are armed and can protect themselves are shielded. I think all the motions and counter-affidavit has been charged and this is purely an academic exercise.”
Daudu also asked the court to release the travel documents of the accused to him so that he would be able to travel abroad for medical check-up.
According to him, Dasuki was billed to travel a day before his arrest for medical treatment but the arrest and trial has so far prevented him from doing so.
Labaran, who appeared for the prosecution therefore requested for adjournment to be able to react to the motion for release of Dasuki’s travel documents.
Justice Ademola then adjourned the case to Wednesday, October 28, 2015 for ruling on prosecution’s request for secret trial and Dasuki’s request for his travel documents to be released to him.
By PRNigeria
PRNigeria encourages institutions to be transparent in their information management as it provides news items from authoritative sources for free use by the media