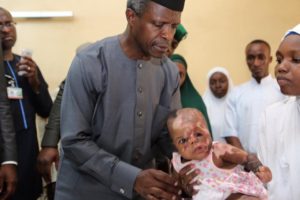 Our being here and ready to engage shows our belief in the common humanity of all men, women and children. We may not know them by name or face, we may speak a different language or dialect…….we too, but for time and chance could have been in exactly the same position.Vice President Prof. Yemi Osinbajo, SAN, stated this today at the opening of the North-East Humanitarian Multi-stakeholders Engagement meeting at the Government House, Maiduguri, Borno State. According to Prof. Osinbajo, the meeting was the “expression of our collective determination to, find the most effective and creative ways to intervene in restoring the dignity, family lives and livelihood of hundreds of thousands of IDPs in the North- East.”He stated further that the North-East humanitarian stakeholders meeting was important not just for what it plans to achieve namely to present and endorse collaborative efforts to the North East but also for the fact that the meeting was taking place in Maiduguri which probably suffered the most loss of lives and property in the six years of Boko Haram scourge.The Vice President empathized that the “North-East region has suffered tremendously in the past”, noting “the destruction of infrastructure, farmlands, businesses and trades, the destruction of schools and the loss of school years”.He however said the rebuilding, restoring and rehabilitation will cost money and time but “neither money nor time can fix the trauma of loss of family, relations and friends, the shame and pain of the raped, the scars and fears of the parents of the abducted and kidnapped as well as the loss of homes and possessions and livelihoods, the hundreds of thousands of orphaned children”.“The task before us are many and profound, to fix brick and mortar and to mend hearts and minds damaged by senseless murderous violence. But we are called not just to mend hearts and minds of victims but also of their traducers, and killers. The young men and women who have been brainwashed to kill, maim and destroy in the warped believe that by doing so they please God” the VP emphasized.While commending the civil society groups, funding partners, regional and international partners, Prof. Osinbajo told the stakeholders that though much have been done much more still needs to be done, stressing “one of the goals of this initiatives is to strengthen the capacities of existing Civil Society Organisations (CSOs), especially in the region, and to aide the development of others where noticeable and important gaps exist.He explained that the Presidential Initiative for the North-East will unveil a plan to help develop the capacities of NGOs in the region and grow new ones where needed.Later at the palace of the Shehu of Borno, HRH Alhaji Abubakar Ibn Umar Garbai, Prof . Osinbajo said he was in the State on behalf of President Muhammadu Buhari, to open the humanitarian stakeholders meeting for the coordination, communication and cooperation for the reconstruction and rehabilitation of the North-East region damaged by the insurgents. He also said the civilian JTF who have been assisting would be absolved by the federal government.Earlier, the governor of Borno State, Alhaji Kashim Shttima commended the federal government, President Buhari and Vice President Osinbajo for commitment to restore peace and develop the region, He also thanked NEMA for its tremendous support. He said due to the unflinching support of the Vice President, the military and civil society Organisations as well as the United Nations, peace and commercial activities have returned to Borno State and IDPs have also returned to the state.Other personalities who spoke at the occasion were the Director General of NEMA, Alhaji Sani Sidi, the UN Country Representative as well as presentation by a member of the Presidential Committee on the North-East Interventions (PCNI).The event was attended by the Governors of Adamawa, Yobe and Deputy Governors of the North-East zone including traditional rulers and regional and international funding partners. LAOLU AKANDESenior Special Assistant (Media and Publicity)Office of the Vice President