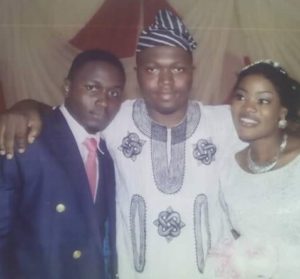 I got married on Saturday, December 19, 2015 and with my wife, I looked forward to beautiful days of honeymoon. But if that was a dream, it never came to pass. An interview I conducted with someone I had related with in recent time as Professor Itse Sagay ruined everything.

How did it start? Sometimes last year, there was a need to seek the views of constitution lawyers in one of my reports. My boss, Mr Kunle Oderemi, who heads politics desk, asked me to seek Professor Itse Sagay’s views also. I asked him to give me his phone number. I collected his phone, searched and dialed 08023137144 and I asked ‘Hello sir, am I on to Professor Itse Sagay?’ ‘I am Olakunle Taiwo from Nigerian Tribune’ and the person replied ‘Yes, what can I do for you?’ and I continued: ‘I would like to seek your views on some issues as a legal expert’, he responded: ‘Can you please send me a text, because I am busy?’. I replied ‘Okay sir.’

I sent him a text but he didn’t reply then I never called back until the middle of this year that I was transferred to Sunday Tribune. I started calling the number back around August/September and I would ask for his reactions and on several occasions, he replied on Whatsapp and once as a text message. In fact, the number was the first I called when the matriarch of the Awolowo dynasty passed on. The news of Mama Awolowo’s death came to the owner of the number as a shock. Then I asked for his reaction and he did nothing more or less.
A few days ago, I called the number again and asked that I would like to have an elaborate interview with the man on the legal implications of the Kogi governorship election, why key institutions are corrupt, the president’s anti-graft crusade, among other national issues. And he asked if I could come to Lagos or do a phone interview. I said since we planned to publish it quickly I would prefer to conduct it on phone. But the interview could not be conducted that day. It was conducted the following day around 3:30 pm. The interview was published on December 20, 2015, a day after my wedding.

I received a call from my Editor, Mr Sina Oladeinde, that Professor Sagay had disclaimed the interview. I was stunned, surprised but calm, because I had the audio recordings of the interview spanning 46minutes 16 seconds. I was calm because apart from my conscience being very clear on the matter, I knew I had also related on phone with this respectable Nigerian, seeing him as a mentor, especially when I discovered that despite his age, he was so ICT savvy, communicating not just with sms, but interestingly on Whatsapp. He was even one of the key invitees to my wedding. He not only wished me well but promised to be at the event. I felt on top of the world. I was so happy to the extent that I instructed the event planners to create a special seat for the presidential adviser on anti-corruption war. But he did not come.

The audio recordings of the interview was/is in my phone and so, I played it for my editor to hear and be convinced that I didn’t concoct the interview. But I saw some signs of disturbance in my editor’s countenance after listening to a few minutes of the interview. He said he was not sure that was Sagay’s voice. He asked for the number again. I gave him. Then he called Mr Oderemi (on whose phone I copied the number in the first instance last year) to also forward Sagay’s number to him. Oderemi supplied the number- 08023137044- and I did not immediately see trouble until we compared the two numbers and discovered I had made a mistake while writing out the number in the first instance and I had all along been calling the wrong number-08023137144-, and speaking with the wrong person, instead of Professor Itse Sagay. I almost collapsed at the lobby of the hotel which was hosting my honeymoon. What have I done to myself, my career, my bosses, my employers, my company that feeds my family, God!? I felt like asking the ground to open up and swallow me. My wife of two days was in the room oblivious of the damage that had been done to our honeymoon. With me, the honeymoon was over in just two days!

But I have read so many reports online (including on Saharareporters) accusing me of concocting an interview with Professor Sagay. I did not set out to do that. I did not do that. I was careless. I could be accused of naivety, taking things for granted. I could be accused of not being alert enough as I should. I plead guilty to all. What I am innocent of is criminal intent in conducting a fake interview. I joined journalism with an ambition to go far. I never knew there were deadly potholes on my way to realizing my career dream. I hope and pray that this cup shall pass…While accepting responsibility for the error, I state with all sense of responsibility that it was not intentional, not deliberate. In my almost two years in journalism, I have worked hard to build a future in the profession and serve my country, through my employers, truthfully and diligently. I apologise to Professor Itse Sagay most especially.

But there are lessons to be learnt in all these. I have learnt mine in a very bitter way. I urge my colleagues everywhere to learn from my case.