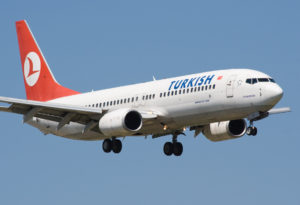 As a consequence of the intervention of the Nigerian Civil Aviation Authority, Turkish Airline has calmed frayed nerves with compensation to all the passengers whose rights were abused due to the airline’s delay of their luggage on the infamous Flight TK 624 scheduled service from Istanbul to Abuja.
The Authority (NCAA) has also advised the Federal Airports Authority of Nigeria (FAAN), as part of its functions, to provide signs informing passengers of possible penalties of unlawful acts at the airport, such as the security breach that took place on the 27th December, 2015.
On compensation some of the aggrieved passengers after collecting their luggage which came on a charter from Istanbul, Turkey were paid monetary compensation, the highest of which was N80, 000.00k. It is gathered that the airline, depending on the level of infraction was made to pay N8,000 to some while others got N10,000, N20,000 and so on.
According to NCAA, “The Airline under the supervision of the Consumer Protection Officers (CPO) of the Regulatory Authority ensured that all the passengers were paid full monetary compensation as contained in the Nigerian Civil Aviation Regulations (Nig.CARs).”
“In addition, a cargo flight and an Airbus were arranged to freight to Abuja, Nigeria, all contentious backlog of baggage that were earlier short landed. All concerned passengers have collected same as at the time of this report.”
These were contained in a report of the investigation carried out by NCAA over the recent Tarmac Intrusion by Turkish Airlines passengers submitted to the Director General, Nigerian Civil Aviation Authority (NCAA), Capt. Muhtar Usman.
According to the report by the NCAA however, there were several observations and recommendations including provision of signs informing passengers of possible penalties of unlawful acts at the airport.
Furthermore, clear cut penalties arising from unlawful acts should be displayed to serve as deterrent to would be violators.
The Close Circuit Television (CCTV) footage will be deployed and the Turkish Airlines should assist in identifying the unruly passengers for prosecution to dissuade others from carrying out similar acts subsequently.
“In the course of the final phase of the investigation, salient questions will be asked concerning airport management. If established sanctions will be applied for violating access control requirements in the National Civil Aviation Security Programme (NCASP) chapters 4.5 (a),6.1.4.6.2.1 and 6.3.2.”
“Also, the requirements of the Nigerian Civil Aviation Regulations Part 17 section 17.37.1-3.”
“NCAA has also directed the appropriate Agencies to put up appropriate control mechanism strong enough to prevent unauthorized access to restricted areas of the airports forthwith. These recommendations and others would be implemented to the letter to foreclose and mitigate future occurrence.”
James Odaudu
Deputy Director, Press and Public Affairs