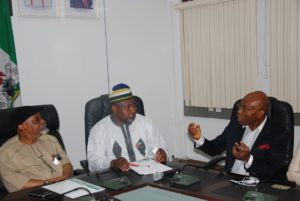 Concerned by the growing unemployment rate in the country, the Federal Ministry of Labour and Employment is desirous to collaborate with Zinox Group an indigenous Information and Communication Technology (ICT) giant to create job opportunities for the unemployed Nigerian youths
This was made known in  Abuja  when the Zinox Group Management team led by its Chairman/Chief Executive Officer, Dr. Leo Stan Ekeh paid a courtesy visit to the Minister of Labour and Employment, Senator Dr Chris Ngige in his office.
The Minister said that one of the major challenges facing the Nigeria nation is unemployment which the Government of President Muhammadu Buhari is leaving no stone unturned to making sure that this social canker worm is addressed holistically.
Dr. Ngige reiterated the determination of the Government to tackle the scourge of unemployment head-on, adding that the skill acquisition centres spread across the country would be resuscitated for the use of unemployed Nigerian youths to acquire relevant skills.
He assured that his Ministry’s doors are widely opened to collaborate with any organisation willing to assist in creating jobs, stressing that partnering with Zinox will in no small measure create jobs for the teeming unemployed youths in the country.
While commending Zinox Group for its immense contribution to the ICT development in the country, he decried that presently the Ministry does not have credible data base of unemployment in its various forms.
Furthermore, he stated that the Ministry will roll out its programme on employment generation once the 2016 Budget is passed.  ‘’By the end of the first quarter, we will hit the ground running’’. He assured.
Also speaking, the Minister of State for Labour and Employment, James Ocholi SAN commended Yudala, one of the Zinox Group which has been able to carve a niche for itself within a short time of its existence adding that he was proud of the private sector for its contribution to the development of the Nigerian economy.
Earlier, the Chairman and Chief Executive Officer of Zinox, Dr.Leo Stan Ekeh said that the purpose of their visit was to congratulate the Ministers on their appointments as well as to seek for collaboration with the Labour Ministry to complement the efforts of the Federal Government at job creation.
He said that his decision to seek collaboration with the Ministry was borne out of the need to reduce to the barest minimum the unprecedented rate of unemployment in Nigeria stressing that Zinox Group is willing to partner with the Ministry of Labour and Employment to create jobs in the 774 Local Government Councils in Nigeria.
He expressed worry that quite a lot of Nigerians are either unemployed or underemployed; ‘’ the biggest challenge in the industry is to find the qualified people, there are graduates but they don’t have skills, we think we can change things around.’’ He added.
Dr.Ekeh recommended that in the 774 LGAs without spending money, a data base of unemployed can be built citing Yudala which has so far employed 420 graduates since inception in July 2015 and it is in the process of employing another 200.
He opined that Zinox is looking forward to collaborating with the Ministry to achieve a national data base where unemployed should register their profiles in the various 774 LGAs headquarters for easy access to employers adding that this platform will create avenues for qualified graduates to be located for employment irrespective of where they reside. He concluded
Samuel Olowookere
Deputy Director (Press)

Bichi’s Infrastructural Efforts in the Service