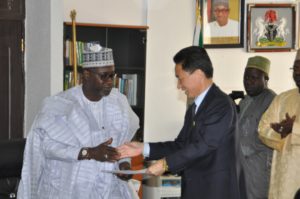 The Honourable Minister of Water Resources, Engr. Suleiman Adamu, FSNE,   Has stated the Federal Government’s readiness and willingness to work with more foreign investors interested in investing in the Water Sector in particular and the economy in general.
Engr. Suleiman made this known today, Tuesday 26th January, 2016 when the Democratic People’s Republic of Korea Ambassador to Nigeria, Jong Yong Chol paid him a courtesy visit in his office.
The Minister noted the long standing relationship between Nigeria and Democratic People’s Republic of Korea.  He expressed delight in advancing the long standing relationship of the two countries who share similarity, especially in rural development policies.
Speaking further, he said, “we are a developing country and we are ready to borrow from your experiences in advancing our irrigation facilities and farms infrastructures in meeting with the present government thrust for agricultural revolution”.  He added that, Water is very crucial in meeting with the country’s agricultural policy of the present administration.
While thanking the delegates, for the Memorandum of Understanding (MoU) submitted to the Ministry, the Minister stated that the Ministry is currently facing a lot of challenges in its irrigation facilities, maintenance of dams and capacity building.  These areas according to the Minister calls for urgent attention by both countries in discussing the MoU.
He however thanked the delegation for showing interest in the Sector.  “Thank You for coming at the time we need assistance from investors to turn the fortunes of the country, so we are open to more investors in the country especially in agriculture, solid minerals and water as no one can talk about agriculture without water.  We are doing everything possible to support the agriculture policy of the Federal Government”, he said.
Earlier, while presenting the draft of the MoU to the Hon. Minister, the Democratic People’s Republic of Korea Ambassador to Nigeria, Jong Yong Chol said his country is set to mark the 40th  Anniversary of their bilateral relationship with Nigeria, there is the need to further advance the relationship that exists between the two countries. According to him, his country is looking at carrying further a bilateral relationship with Nigeria in areas of education and water sector to an excellent level.
He noted that agriculture plays a very pivotal role in any country’s socio-economic lives and Nigeria is no exemption. With their experiences in Agriculture, he said signing the MoU, Korean is going to help Nigeria develop its water ways, irrigation facilities and other water resources management as well as sending dams, irrigation and civil Engineers to help in the development of the country’s Water Sector.
M. E. UMOH (Mrs.)
Director (Information)
FMWR