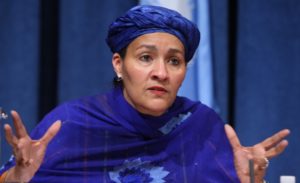 Environment Minister, Amina Mohammed has said that the National Environmental Sanitation Day (NESD) that was introduced by the Buhari Administration in 1984 is to be resuscitated.
Speaking today in Kuje, Abuja on the occasion of the tripartite Environmental Sanitation Day organized by the National Inter-ministerial Committee on ‘LASSA FEVER’, the Minister said “the idea of designated sanitation days at states, local governments as well as markets across the country has remained a legacy. She added that the fact that Nigerians have voluntarily continued the practice for 32yeare after it was first introduced is a clear indication that the idea is not only sustainable, but also in the overall interest of the nation, her people and the Environment.
She maintained that it is her “strong desire to consult with states, local governments and other relevant stakeholders to create a strong interface to bring back the NATIONAL ENVIRONMENTAL SANITATION DAY (NESD).
Answering questions from newsmen, the Minister explained that she will partner with corporate organizations, states and local governments to repackage the National Environmental Sanitation Day with a view to giving Nigerians the desirable change in the environment sector, adding that existing sanitation programs at all levels will be strengthened and encouraged with every necessary incentives to complement the national program.
According to her, a comprehensive process of consultation, including discussions on the best practices to adopt to ensure the program is fully consolidated will be on the front burner at the National Council on Environment (NSE) due to hold in Lafia, Nasarawa State in the coming weeks.
The Minister said, when fully resuscitated, a Peer Review Mechanism in the sector will be initiated, aimed at determining the cleanest states, cities, local governments and markets in the country, which will be rewarded with environmental related projects in their domain to be executed by the Federal Ministry of Environment.
According to the Minister, the re-emergence of LASSA FEVER and other environmentally related diseases in the country calls for greater attention and synergy by stakeholders of our environment as a strategy for combating the threats and protecting the lives of the people, adding that deaths arising from such epidemics are indeed avoidable and must be prevented at all cost.
Speaking further on the theme of the occasion, “CLEAN ENVIRONMENT, OUR COLLECTIVE RESPONSIBILITY FOR A HEALTY LIVING” the Minister said the theme was carefully thought out to highlight the fact that most of the common illnesses our people suffer from, such as Malaria, Cholera, Typhoid Fever, Scabies and LASSA FEVER occur as a result of poor environmental sanitation and hygienic practices.
She said the occasion presents a wake-up call and an opportunity for the people of Kuje, the F.C.T and indeed the country to reflect on our general attitude to personal hygiene and healthy environment, adding that there is need to pay greater attention to proper solid waste management and the provision of public toilets.
While promising that she will make environmental sensitization across the country a daily affair, the Minister said she will do everything humanly possible to support the F.C.T and all the 36 states of the federation in the task of realizing a clean and green Nigeria.
The occasion was attended by the Ministers of Environment, Health and FCT as well as the Minister of State for Environment.
Other dignitaries at the occasion include the Permanent Secretaries of (Health, Environment, the FCT) as well as Chief Executives of Agencies under the three Ministries.
Also at the occasion were their Royal Highnesses, the Gomo of Kuje, the Ona of Abaji among other traditional rulers.
Ben Bem Goong
Deputy Director (Press)
Efe Ovuakporie Federal Ministry of Environment,
Abuja