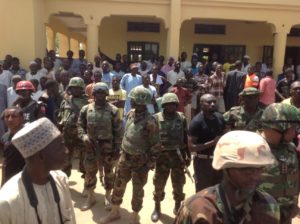 While condoling the District Head of the Village, Alhaji Lawal Bashir over the unfortunate incident, General Umaru reassured the people of the commitment of the military to apprehend and deal with the perpetrators.

The military commander commended the villagers for their resilience and urged them to be strong and to always reports strange movement and objects to relevant security agencies as soon as possible. He also commended emergency rescuers, humanitarian and health workers for their tireless and timely response.

It is gathered that the terrorists were on reprisal attacks on members of the Civilian Joint Task Force CJTF) when they launched the attack on Dalori village through Yale, another village close to Maiduguri.

While people were running for safety towards Gomari Kerkeri village, three female suicide bombers were intercepted in their attempt to make their way into the crowd but got blown up. The military had prevented the insurgents from penetrating Dalori Internally Displaced Persons (IDP) camp which prompted detonations of IED by suicide bombers.

Some eye witnesses claimed that the insurgents came in Golf cars and motorcycles and started shooting randomly and setting houses on fire on Saturday’s night.
By PRNigeria