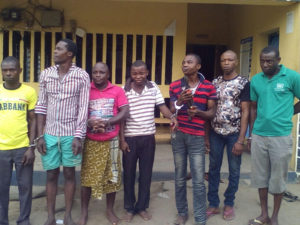 The Rivers State Police Command has successfully rescued Mr. Austin Ajah and Mrs. Winifred Frank few hours after they were kidnapped on 06/02/2016 at about 6:19 pm near Siat Palm farm in Ubima, Ikwerre Local Government. The duo were returning from Owerri to Port Harcourt after attending a wedding.

A patriotic citizen who from a hiding place witnessed the incident informed the police that kidnappers whisked away the victims abandoning their vehicle, Lexus jeep RX 300 by the road side.

The police after recovering the vehicle got information sequel to robust intelligence that the victims were blind-folded and locked up in the house of Onyekachi Okpara, who is the leader gang in Omerelu town. They quickly mobilised and stormed the house at about 1:15 am of 07/02/2016, rescued the victims and arrested Kingsley Bassey ‘m’ 23 years, who was guarding the victims. A big locally made revolver pistol with four live cartridges were recovered from him. Interrogation of Kingsley Bassey led to the subsequent arrest of his six other accomplices namely Nduzi Igoni ‘m’ 25 years, Ogechi Onyeso ‘m’ 24 years, Godbless John ‘m’ 24 years, Saturday Isiah ‘m’ 22 years, Gabriel Dimgba ‘m’ 26 years and Onyekachi Okpara ‘m’ 25 years

The rescued duo while describing their ordeal in the captivity as horrible moment they could wish even their enemy to experience, expressed their appreciation to the police for fearlessly and timely coming to their rescue. They further urged for continued cooperation of members of the public to the police especially in terms of volunteering timely and reliable information to the police.

The suspects would be charged to court immediately after conclusion of the on going investigation, please.