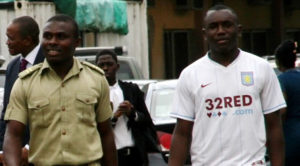 Justice Lateef Lawal Akapo of a Lagos High Court sitting in Ikeja  on Wednesday convicted a 19-year old secondary school leaver, Tobechukwu Igbokwe and sentenced him to 37years imprisonment for defrauding an American,  a sum of $40million( Forty Million United States Dollars) in an inheritance scam.
The convict was arraigned before the court on a 12- count charge bordering on forgery, conspiracy and obtaining money by false pretences. Justice Akapo found him guilty on all 12-counts and sentenced him accordingly. He was sentenced to 7 years on counts 1-8; 8years on count 9; 7years on count 10, 8years on count 11 and 7 years on count 12, making a cumulative of 37years imprisonment.
The sentence is to run concurrently with effect from October 28, 2013. The court also ordered Igbokwe to return the $40million as a restitution to the victim and forfeit a Toyota Corolla car, which is a proceed of the crime, to the Federal Government of Nigeria.
Igbokwe was arraigned on Monday, October 28, 2013 and pleaded not guilty to the 12-count charges pressed against him. He later changed  his plea to “guilty” and was convicted by Justice Akapo accordingly.
Before the conviction, the prosecuting counsel,  Kayode Oni tendered various exhibits before the court which were all admitted and marked as such. However, defence  counsel, D. A. Omougbai  prayed the court to temper justice with mercy, since Igbokwe has shown enough remorse for the offences  he committed.
Tobechukwu Igbokwe (Alias David Prince) and his accomplice, Ifeanyi Obi were alleged to have duped an American: M. Silva, the sum of $40million in an inheritance scam. Silva was made to believe that Igbokwe and his accomplice had a huge inheritance which they wanted to move to a foreign account for safe-keeping.
The victim was asked to send money to “process” the transfer and in the process, he wired $40m in several installments through Western Union to Igbokwe.
Igbokwe also confessed that he had duped other foreigners. Some of them are: T. Bedwell,  $6,000 and R. Hunt $15,000.
Wilson Uwujaren
Head, Media & Publicity