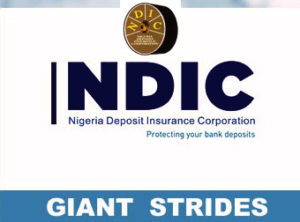 However, the Faculty decided not to disburse the whole amount specified in the cash awards. Instead, it purchased laptops and relevant textbooks for the awardees. This, according to the Faculty, was to sustain the memory of the award for a very long time. The faculty also decided to present a consolation prize (of an undisclosed amount) to the fourth best student who scored 66%, given the narrow margin of the examination scores between the third and the fourth best students with 67% and 66% respectively.

Speaking at the presentation ceremony, NDIC’s Managing Director/CE, Alh. Umaru Ibrahim said that the Corporation instituted the prize awards to encourage academic excellence and also to boost the morale of students who offer the newly introduced DIS courses in their degree programmes.

Represented by the Director of Research, Policy and International Relations, Dr. Jacob Ade Afolabi, the MD/CE disclosed that the Corporation had partnered with seven selected universities to introduce two deposit insurance courses: “Fundamentals of Deposit Insurance” and “Practice of Deposit Insurance” into relevant degree programmes as a pilot scheme. The objectives of the DIS courses, he said, included enhancement of undergraduates’ knowledge in deposit insurance and NDIC’s role in the banking system, adding that the initiative would go a long way to enhance the quality of potential bankers as well as to promote financial literacy among undergraduates.

The NDIC Boss representative however urged the university authorities to extend the DIS courses to other allied disciplines, including Accountancy, Economics, Banking & Finance, Marketing and Actuarial Sciences degree programmes.

In his address, the representative of the ABU Vice Chancellor, who is also the Dean, Post Graduate Studies, Prof. Kabiru Bala expressed the Vice Chancellor’s profound appreciation to the NDIC for introducing the DIS courses and cash awards. Prof. Bala noted the suggestion to extend the DIS courses to other allied degree programmes and pointed out that the university would give the suggestion very serious attention. He also congratulated all the awardees and hoped that the initiative would serve as an incentive to other students to study harder in order to win such awards.

The Dean of the Faculty of Administration and also Head of Business Administration Department, Prof. Bello Sabo commended the NDIC for the DIS programmes and cash awards.  He disclosed that the university was entering into similar partnership with National Pension Commission (PENCOM) and other federal agencies.