Home Government Army, EFCC Yet to Release Ex-Aide to Dasuki 10 Days After Court... 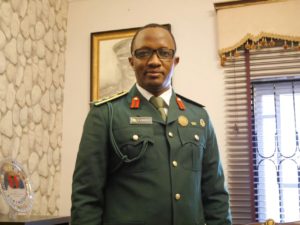 The Economic and Financial Crimes Commission (EFCC) and the Military Authority are yet to effect the release of Colonel Nicholas Ashinze, the former Military Assistant to former National Security Adviser Col. Sambo Dasuki (rtd) as at 10am today (Wednesday March 23, 2015).
PRNigeria gathered that the serving Colonel is still being held incommunicado by the two authorities in defiance of the high court order of March 14, 2016 that directed his release.
A Judge of an Abuja High Court, sitting in Jabi Justice Yusuf Haliru had on March 14, 2016 ordered EFCC, and the Nigerian Army (NA), to release the serving Colonel Nicholas Ashinze who served as Military Assistant to former NSAs, Sambo Dasuki and Patrick Azazi.
Colonel Ashinze who was detained before resuming his new posting as Defence Attaché in Germany, has been in detention since December 23, 2015.
‎
In his judgment, Justice Yusuf Haliru, had ordered the anti-graft agency and the army to immediately release the applicant on self-recognition, saying his detention for over three months without trial, was “‎illegal, wrongful, unlawful and constituted a blatant violation of the fundamental rights of the applicant.”
The court also ordered immediate release of documents and items the anti-graft agency seized from the house of the applicant.
‎Justice Haliru who cautioned the EFCC and the Army which he said acted as if Nigeria was still under military ‎dictatorship said: “The EFCC is a creation of the ‎law. The court will not allow it to act as if it is above the law. It is remarkable to note that the motto of the EFCC is that nobody is above the law, yet they are acting as if they are above the law.
“The EFCC Act is not superior to the constitution of the Federal Republic of Nigeria. The respondents in this matter have not behaved as if we are in a civilised society. They have behaved as if we are in a military dictatorship ‎where they arrest and release persons at will.”
The judge said the constitution stipulated that any person so detained should be charged to court within reasonable time not exceeding two months from the date of arrest.
Justice Haliru stressed that under section 36 of the 1999 constitution, as amended, an accused person is deemed innocent until his guilt is established. ‎ He therefore asked: “Why has the 1st respondent kept the applicant without bringing him to court? Why was the applicant, being a serving military officer who could be easily reached, not granted administrative bail? Or is it that the applicant has been found guilty and already serving his jail term?‎
“Nobody should be subjected to the whims and caprices of the EFCC.
“The essence of the rule of law and constitutional provisions is to ensure a just balance between the ruler and the ruled, between the powerful and the weak.
“Though the EFCC has the responsibility to investigate financial crime, it must however conduct its operations in accordance with the rule of law.
“The court is empowered to guard against improper use of power by any member of the society or agency, EFCC inclusive.‎
“The detention of the applicant, for all intent and purposes, is not just unfair but unfortunate.
“We all support the fight against corruption but it must not be done with utter impunity and disregard to rule of law. The right to personal liberty is guaranteed every citizen of Nigeria by our constitution.
“Why has the first respondent fail to bring the applicant to court since December 2015? Is it that the first, second and third respondents already sentenced the applicant to jail in their own court”.
“The continued detention of the applicant since December is a blatant violation of his fundamental human right”.
The Justice Haliru thereafter declared that the respondents must comply with the court order and effect the release of the applicant.
However, 10 clear days after the court order was made, the two authorities have yet to release the applicant from their custody.
by PRNigeria
PRNigeria encourages institutions to be transparent in their information management as it provides news items from authoritative sources for free use by the media