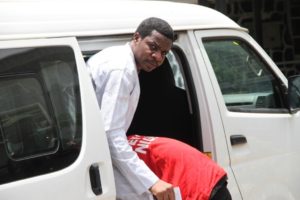 The Economic and Financial Crimes Commission today, April 7, 2016 arraigned five staff of Nigerian Airspace Management Agency (NAMA) before Justice Kuewumi Babs of the Federal High Court Lagos on 21- count charge of conspiracy, forgery and money laundering.
The accused persons are Ibrahim Abdulsalam, managing director of the agency; Nnamdi Udoh, former managing director (still at large), Adegorite Olumuyiwa, general manager, procurement;  Agbolade Segun, general manager, finance; Clara Aliche, director finance;  Joy Ayodele Adegorite, Randville Investment Limited and Multeng Travels and Tours Limited.
The accused persons are alleged to have conspired and stole the sum of N6, 922,676,815 (Six Billion, Nine Hundred and Twenty Two Million, Six Hundred and Seventy Six Thousand, Eight Hundred and Fifteen Naira ) from NAMA.
Troubles began for the accused persons after the Commission received a petition accusing some management staff of NAMA of engaging in acts of grand corruption. A team of Operatives were assigned to investigate the matter where it was discovered that the accused persons allegedly stole the said monies through fictitious procurement contracts, fictitious container clearing and fraudulent cash advances.
One of the charge reads that: “you, Ibrahim Abdulsalam, Nnamdi Udoh (still at large) Adegorite Olumuyiwa, Agbolade Segun, Clara Aliche, Joy Ayodele Adegorite, Randville Investment Limited and Multeng Travels and Tours Limited, on or about the 19th day of August, 2013 in Lagos, within the jurisdiction of this  Honourable Court, with intent to defraud conspired amongst yourselves to induce the Nigerian Airspace Management Agency (NAMA) to deliver the sum of N2,847,523,975.00 (Two Billion, Eight Hundred and Forty Seven Million, Five Hundred and Twenty Three Thousand, Nine Hundred and Seventy Five Naira) to Delosa Limited, Air Sea Delivery Limited and Sea Schedules Systems Limited under the pretense that the said sum represented the cost of clearing consignments belonging to the said Agency and you thereby committed an offence contrary to section 8 (a) of the Advance Fee Fraud and Other Fraud Related Offences Act, 2006 and punishable under section 1 (3) of the same Act”.
When the charge was read to them, the accused persons pleaded not guilty.
In view of their plea, prosecuting counsel, Rotimi Oyedepo, asked the court for a trial date and to remand the accused persons in prison custody.
However counsel for the first accused person O. Oshoogun pleaded with the court to remand his client in the EFCC custody pending the hearing of his bail application. All other defence counsel aligned themselves with Oshoogun in urging the court to remand their clients in the custody of the Commission.
In his response, Oyedepo told the court that the proper place to remand accused persons was prison custody. He further added that the detention facility of the Commission was overstretched.
Justice Babs upheld the submission of the prosecution and ordered that the accused persons be remanded in prison custody while adjourning the matter to April 12, 2016 for hearing of bail applications.
Wilson Uwujaren
Head, Media & Publicity
7th April, 2016
—
PRNigeria encourages institutions to be transparent in their information management as it provides news items from authoritative sources for free use by the media