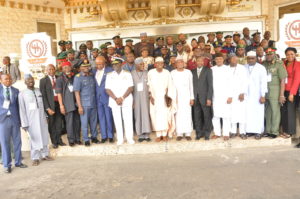 Irked by the growing wave of communal conflicts and other clashes in some parts of the country, the Federal Government has ordered all security agencies in the country to crush and deter all crises that have the potential to breach the peace and national stability.

While it restated that its first priority is to ensure the security of lives and property of the citizenry, government said all socio-economic activities in the country must continue to thrive without any hindrance from criminal elements and terrorists.

Minister of Defence, Mansur Muhammad Dan-Ali gave the order on Tuesday in Abuja at a seminar on “Media Management in Crisis Situation” for Information Officers of the Military, Security and Response Agencies, which was organized by the Centre for Crisis Communication (CCC) with support from the Defence Headquarters DHQ as well as the Nigeria Stability and Reconciliation Programme NSRP.

Declaring the occasion open, he said “all security agencies in Nigeria have been called upon to crush and deter the threats of crisis and conflicts that have potential to disrupt peace and security of our country.

“Our security and response agencies are constantly engaged in the essential tasks required for meeting the internal security objectives of ensuring safety and security of Nigeria’s territorial integrity, its population and all the critical infrastructures. Our government will not relent in this primary objective”, he pledged.

He added that the government would continue to acknowledge the sustained efforts of the various military, security and response agencies who in spite of all odds are constantly and significantly mitigating the challenges and consequences of violent eruptions and crisis across the country.

The minister pledged continued support for all the agencies particularly those battling insurgency in the North East so that they can effectively deliver on their mandate.

On crisis management, the minister tasked information officers of the various agencies to be patriotic and professional in the discharge of their duties.

“You must bear in mind that our dear country is currently confronted with several challenges which demand every sense of professionalism in the way and manner information is to be managed.

“You have the responsibility to manage sensitive information at your disposal with all sense of patriotism and to relate with media and the general public with utmost sense of professionalism taking into cognizance the importance of our cherished national interest and national security”, he charged.

The minister who commended the CCC for its contribution to national security also charged other organizations to emulate such laudable initiative.

Welcoming guests and participants to the seminar, the Executive Secretary, Centre for Crisis Communications CCC, Air Commodore Yusuf Anas (retd) said the seminar was designed to assist information officers to effectively and efficiently engage the media to communicate responsibly with the public.

He added that the media influence in contemporary scheme of human endeavour cannot be downplayed, hence the need to develop an efficient and effective cadre of Public Relations personnel who would be able to manage communication in crisis situation.

The seminar, he added, would also encourage synergy among security and response agencies through harmonisation of information, recalling that in prior to the establishment of the Forum of Spokespersons of Security and Response Agencies FOSRA, the forebearer of CCC, there used to be conflicting information from the various agencies during crisis situations. He however conceded that there was still an urgent need to enhance greater communication with the public.

In his goodwill message, Programme Manager of NSRP, Dr Ukoha Ukiwo said the NSRP is working in eight target states on conflict mitigation, especially reducing it’s effect on the vulnerable segment off the population.

He congratulated the CCC for being able to host the seminar in spite of several challenges. He added that there would be a replication of the seminar in the North East and South South zones of the country.