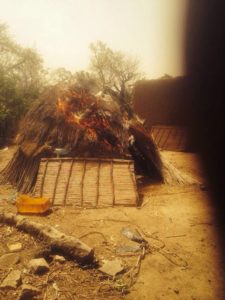 The troops of 1  Division Nigerian Army have  intensify clearance operations against cattle rustlers and armed bandits in Kaduna and Zamfara States, north western Nigeria. Within the last four days, they have killed 2 notorious cattle rustlers that were suspected to have killed 7 innocents persons in Bungudu Local Government Area of Zamfara State. They also arrested 5 declared wanted armed bandits and recovered arms and ammunitions from them and thereafter destroyed their camps.

The troops also conducted a clearance operation in Kuduru, Birnin Gwari Local Government Area of Kaduna State in which they arrested 5 cattle rustlers, recovered arms and ammunitions  and then destroyed the armed bandits camps.

The elderly man, Mallam Ibrahim Matuk stated that he suffered untold hardship in the hands of the Boko Haram terrorists who killed all his children while in  captivity.

Please disseminate this information to the public through your medium. Thank you for your kind cooperation. Colonel Sani Kukasheka Acting Director Army Public Relations