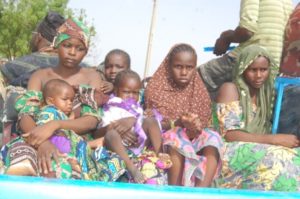 Yesterday, Wednesday 4th May 2016 e at about 7.00pm in the evening, Boko Haram terrorists attacked our troops involved in the clearance and rescue operations  in Sambisa forest nicknamed “Operation CRACKDOWN”, while on harbour.

The terrorists who came in 5 Toyota Hilux vehicles mounted with Anti-Aircraft guns which they fired along with 81mm mortar.  The battle ready troops rose to the occasion and repelled the attack and pursued the terrorists that withdrew in disarray towards the river line of Izza-Mainyakare axis.

The attack lasted for about 40 minutes without any casualty on our troops  while an unconfirmed number of Boko Haram terrorists were killed. The troops recovered an 81mm mortar tube from the terrorists.

The troops maintain highest level alertness and vigilance  at the harbour area.  They will further exploit and continue with the clearance operation.

Troops of 7 Division based on information received, conducted  a special operation at Chingurimi, Walasa and Masa villages  which were believed to have large  concentration of abducted  women and children were held hostages by the Boko Haram terrorists on Wednesday 4th May 2016.

The troops killed quite a number of Boko Haram terrorists and rescued 17 women, an old man and 24 children at the area. They also recovered 1 AK-47 rifle, 6 rounds of  7.62mm, 295 rounds of 7.62mm (NATO), 12 Dane Guns, 21 unserviceable mobile telephone handsets and one serviceable as well as150 different SIM cards.

In all, the troops rescued over 400 persons held hostage by Boko Haram terrorists were freed by the troops.

Please disseminate this information to the public through your medium.