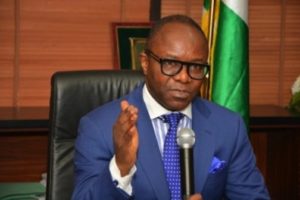 The ultimatum by the Petroleum and Natural Gas Senior Staff Association of Nigeria, PENGASSAN to embark on a nationwide strike effective mid-night, Tuesday, May 24, 2016 has been suspended. This is sequel to the intervention of the Hon. Minister of Labour and Employment, Sen. Chris Ngige (OON ) and the Hon. Minister of State for Petroleum, Dr. Ibe Kachikwu.
In a conciliatory, pre-strike meeting today in Abuja, the Minister of State for Petroleum exhaustively   briefed PENGASSAN and other stakeholders on the vexed issue of Joint Venture Cash Call, (JVCC) the arrears of which have not been paid to the Joint Venture partners, hence, the threat by the International Oil Companies (IOCs)  to lay off their Nigerian workers while refusing to pay some of their allowances due to an alleged shortage of cash.
Dr. Kachikwu explained that his Ministry was restructuring the operational modalities of the Joint Venture Cash Call especially in view of the low oil prices but assured the union, the JVCC partners and other stakeholders of positive and agreeable results when the meeting reconvenes in late June.
The Minister of Labour and Employment, Sen. Ngige who hosted the meeting promised   that the Oil Industry Stakeholders’ committee dealing with the issues of labour malpractices like long contracting of staff, casualization and unilateral declaration of redundancy by the oil contractors and the International Oil Companies on the one hand, as well as the unnecessary and incessant issuing of threats of strike by the unions would resume next month.
“We all recall that this committee was headed by the late Hon. Min. of State for Labour and Employment, Bar. James Ocholi but in view of the importance and the urgency of the committee, I will assume its full leadership in June to accelerate and bring its assignment to a fruitful completion, part of which is to generate some oil- labour regulations into laws for the Petroleum Industry Bill (PIB) .”
In his remarks, the National President of PENGASSAN, Comrade Francis Johnson thanked the two Ministers for the elucidative and insightful responses to their agitations and assured that the union was quite satisfied with the position of government on issues in conflict, therefore, the decision to shelve the planned strike with immediate effect.
Inputs from the Ministries of Finance, Budget and Planning, and that of Ministry Works, Power and Housing on other issues raised by the union are expected at the next meeting scheduled for the 23rd of June 2016.
Meanwhile the negotiation between the Federal Government and Comrade Ayuba Wabba led NLC will reconvene tomorrow, Wednesday 25th May, 2016 at 2:00 pm and the venue is the conference hall of the Secretary to the Government of the Federation.
Samuel Olowookere
Deputy Director, Press