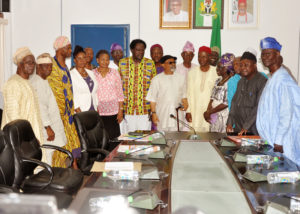 The Minister of Labour and Employment, Sen. Chris Ngige says the Federal Government will comply fully with section 173(3) of the constitution  that makes review of pension compulsory every five years or at any increment of salaries .
“The constitution is clear in section 173(3) on how pension should be administered. It is to be reviewed every five years or upon an increment in salary. A review was done in 2011 on minimum wage, and once the minimum wage is touched, it should automatically affect the pension,” said Sen. Ngige who received in audience, the leaders of the Association of Contributory Pensioners of Nigeria (ACPN) in Abuja today.
‘’Am not a believer in George Orwell’s Animal Kingdom where some animals are more equal than others. I do not believe in different yardstick for different persons. This is the law of nature and of creation. We are all created equal.  It is just that some people are more privileged than others. Having put in the green part of your lives, serving the nation, nobody should discriminate against you. I don’t understand why in the same country, some pensioners are receiving full benefits while others are not. This is unconstitutional.”
The Minister regretted the ordeal of the contributory pensioners and promised to urgently institute an appropriate liaison with Pension Commission, PENCOM, to rectify observed operational anomalies as relates to the group, so as to ensure that their benefits were fully paid. He added that pension matters by the ILO Convention 102 should be under the Ministry of Labour and Employment. “We shall therefore not abandon you,” he assured.
He further said the existing Pension Act made it difficult to register two separate unions under pension as requested by the contributory pensioners.
“It is either that we get as a special concession for you or we amend the Pension Act 2004 to make a place for you as National Union of Pensioners. But let’s bear in mind that before an act of the parliament is amended, it takes all stakeholders into consideration and takes time too.  We can also seek for the amendment of the Trade Union Act to give us powers to fully entertain your case.”
Earlier in his address, the Protem Chairman of the association, Chief Uche Ekpo lamented the non-representation of the Contributory Pensioners by an organized union, insisting that what the Trade Union Registrar cited as reason for denying it registration covered only the non-contributory pensioners. He therefore sought the assistance of the Honourable Minister for the registration of the body as a trade union so as to better articulate and push the interests of the members of the union.
He drew attention to what he called discriminatory implementation of the Pension Reform Act 2004 which has made some government departments and agencies pull out of the Contributory Pension regime and further requested for the review of pension as guaranteed by the constitution.
Samuel Olowookere
Deputy Director, Press.