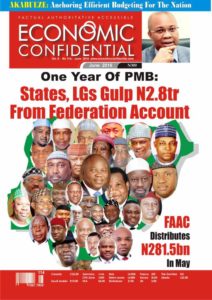 A new report has disclosed that the 36 states and the 774 local government councils in Nigeria shared a total sum of N2.8 trillion from the Federation Account in the one year of President Muhammadu Buhari’s administration.
An exclusive report by the Economic Confidential, an intelligence economic magazine, disclosed that the total figure was payment made to the two tiers of government between June 2015 and May 2016 at the monthly meeting of the Federation Account Allocation Committee (FAAC)..
In the report, Lagos state is ranked first as the highest recipient of gross allocation with a total sum of N178bn in the twelve months. It is followed by Akwa State N173bn, Delta State N144bn and Kano State N117bn. The five states cornered a quarter (25%) of the total allocation for the States and local government councils in Nigeria within the one year period.
Among the 10 highest recipients from the Federation Account are Bayelsa State which got N95bn; followed by Katsina State N88bn, Oyo State N84bn, Kaduna State N83bn and Borno State N78bn.
The lowest recipients are Gombe and Ebonyi States that got N49bn each followed by Ekiti and Nasarawa States N50bn each and Kwara N52bn.
The report further disclosed that Edo and Ondo which are oil-producing states got N66bn and N71bn respectively while another state in the South-South, Cross River State merely received N59bn.
The Economic Confidential gathered that factors that influence allocation to states and local government councils from the Federation Account include: Population, Derivation, Landmass, Terrain, Revenue Effort, School Enrollments, Health Facilities, Water Supply and Equality of the beneficiaries.
Meanwhile, the Economic Confidential which has been publishing the monthly Federation Account Allocation figures in the print edition of the magazine since January 2007, has commenced the publication of the monthly allocation in its online version.
The magazine is a sister publication of PRNigeria, a news release syndication platform.
Please see the Breakdown of the allocations to States and their Local Government Councils from the table in this link: http://economicconfidential.com/2016/06/one-year-buhari-states-lgs-gulp-n2-8tr-federation-account/
By PRNigeria
PRNigeria encourages institutions to be transparent in their information management as it provides news items from authoritative sources for free use by the media