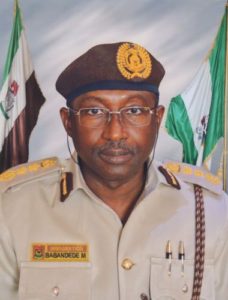 To win the war against terrorism, insurgency and other organized crimes it has become imperative for the Nigeria Immigration Service to be granted access to the INTERPOL I-24/7 portal”. This was the assertion of the Comptroller General of Immigration (CGI) Muhammad Babandede when the Ag. Inspector General of Police, Ibrahim Idris paid him a courtesy visit on Friday 24th June 2016 at the Immigration Headquarters in Abuja.
Babandede said that why it is imperative is because NIS provides the frontline officers at our land, sea and air borders in the security architecture of Nigeria as in other countries. Therefore, access to the INTERPOL database will improve our border security considerably. The INTERPOL I-24/7 network enables the 190 member countries to search and cross-check data of suspected criminals, wanted persons, stolen or lost travel documents within seconds.
The INTERPOL I-24/7 is installed at all 190 National Central Bureaus which are under the Police. However, in realization that in some countries Immigration and Customs are not under the Police, INTERPOL is now focusing on extending access to these other agencies.
Though access to INTERPOL database will be most welcome, the CGI revealed that “NIS has achieved tremendous success in border control at our Airports through the Electronic Passenger Registration System (e-pars)”. The e-pars has integrated components that simultaneously cross-checks the data of a passenger against NIS watch list as well as registers his arrival or departure real time when the passenger’s passport is placed on the Document Reader at the immigration control point.
Speaking further the CGI emphasized the need for the NIS and NPF to collaborate at the lower level especially as he intends to send a memo to the Hon. Minister of Interior, Lt. General Abdulrahaman Dambazau (rd) requesting to use the instrumentality of the Immigration Act 2015 and the Immigration Regulation to commence registration of all foreigners from the Local Government Areas. At this level it would be productive to share intelligence between the two security agencies.
Earlier, the IGP told his host that his visit was to seek collaboration in the area of Internal Security. He said “if criminals can work together to inflict pain on the society, there is no reason security agencies should not come together to present a stronger front”. While acknowledging the cordial relationship that exists between officers of the Nigerian Police and Immigration, he proposed “the establishment of a center where officers representing the various security agencies can jointly co-ordinate activities in providing internal security”.
(Signed)
Ekpedeme King
Deputy Comptroller of Immigration
Service Public Relations Officer
PRNigeria encourages institutions to be transparent in their information management as it provides news items from authoritative sources for free use by the media