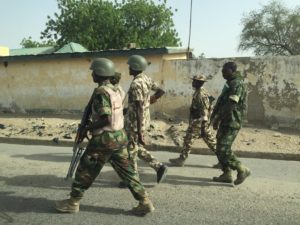 At the early hours of today, troops of 118 Task Force Battalion, 8 Task Force Division sprang a surprised ambush on some elements of Boko Haram terrorists along Gerere Junction, Kukawa Local Government Area, on the northern part of Borno State.
The Boko Haram terrorists were suspected to be fleeing from the advancing troops of 119 Task Force Battalion presently mopping the general area of Kangarwa in Kukawa Local Government Area.
During the operation, the troops killed 4 Boko Haram terrorists carrying logistics items. The troops recovered 48 Jerry cans containing 1,440 litres  of Premium Motor Spirit (PMS)  Automatic Gasoline Oil (AGO),  8 Motorcycles  out of which 2 were destroyed, 21 rounds of 7.62mm (Special) ammunition, 2  AK-47 rifles,  an unprimed Improvised Explosive Device and a 36 Henagar Hand Grenade, as well as assorted drugs.
However, one of the military vehicle and communication equipment were badly damaged from gun shots by the terrorists.
The troops have continued to intensify vigilance and high level of alertness following concerted efforts of clearing the remnants of the terrorists.
You are please requested to disseminate this information to the public through your medium.
Thank you for your kind cooperation.
Colonel Sani Kukasheka Usman
Acting Director Army Public Relations
PRNigeria encourages institutions to be transparent in their information management as it provides news items from authoritative sources for free use by the media