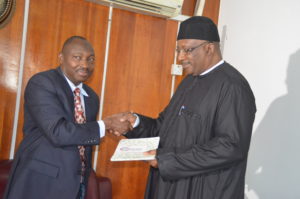 As part of measures to stave off further attacks on farmlands as well as reduce incidences of cattle-rustling in some parts of the country, the federal government has concluded arrangements to create a ‘Special Force’ within the Nigeria Security and Civil Defence Corps NSCDC to tackle the menace.
Minister of Interior, Gen. Abdulrahman Dambazau (retd) announced this in Abuja when he received a delegation from the Centre for Crisis Communication (CCC) led by its Executive Secretary, Air Commodore Yusuf Anas (retd).
He said he was already working with his counterpart in the Ministry of Agriculture and Rural Development, Audu Ogbe in that direction.
“It is necessary to partner with the CCC in the area of strategic communication because this ministry is the hub of public safety and internal security and basically what we do here is to enhance the ease of doing business in Nigeria.
“We are working with the Ministry of Agriculture to create a special force in the Civil Defence that will protect agricultural investments and products”, he stated.
On the situation in the North-East, Dambazau said government is currently doing a lot of training for the police and the NSCDC in order to deploy them in all liberated areas, charging the CCC to assist the government in her peace-building efforts.
He said; “the issue of crisis communication is fundamental towards not only resolving crisis but also in peace-building. So, you have a lot of role to play particularly now that we are experiencing all forms of crisis in addition to the one in thee North-East.
“For people who are abroad, their major source of information is the media. If they keep reading negative reports about crisis in any part of the country, they will not come and invest because the impression they would have is that Nigeria as a whole is not safe.
Earlier, Air Commodore Anas (retd) thanked the minister for accepting to be part of the centre’s forthcoming seminar on crisis communication in Port Harcourt.
He said the interior ministry has a strategic role in the security architecture of the country, considering that it superintends over the police, immigration, fire service, civil defence, prison service and other paramilitary services.
“The Centre has been synergizing with the agencies under the ministry and we want to assure you of closer partnership in the area of managing crisis communication. This is especially necessary because information dissemination is a very vital component of the change agenda as timely and careful release of information is crucial to avoiding destructive rumours”, he stated.