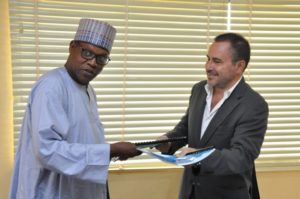 In furtherance of its commitment and determination to address the many social and economic problems of the North- East region of the country, the Federal Government signed a contract agreement with SMEC International PTY Ltdfor the preparation of a Strategic Action Plan for the Development of Water Resources in the Komadugu Yobe Basin in Nigeria.
Signing the agreement on Friday 15th July, 2016 in the office of the Executive Director of Nigeria Integrated Water Resources Management Commission, the Administrative Secretary of Hadejia Jama’are Komadugu Yobe Basin Trust Fund, Dr. Hassan Bdliya said that the project will address water resources management issues in the basin by applying the integrated water resources management approach with the river basin and costing of viable physical interventions that will enhance livelihoods and ecosystems in the basin.
Continuing, Dr. Hassan said, “the Project of  about 1.9 million Euros is supported by the grant from the African Water Facility and managed by the African Development Bank. It would cut across 6 states in the North West and North East Zones of the country.”
He added that the agreement between the Federal Government and SMEC is a positive milestone in resolving the lingering economic crisis of the region in particular and Nigeria in general.
While reacting to the Administrative Secretary of the Trust Fund’s address, the Regional Manager- West Africa of SMEC, Mr. Jose Fernandes, commended the Federal Government for the boldness in signing the agreement as this would go a long way in addressing the many challenges occasioned by degradation of the water and land resources in the basin.
Mr. Fernandes stated that the specific objectives of Project are; formulation ofthe Komadugu-Yobe Basin Water Resources Development Strategic Action Plan (SAP), development of a modified reservoir operation rules for the re-operations of Tiga and Challawa Gorge Dams that optimize water resources allocation and use. Lastly, the preparation of water resources development projects for implementation over the short term period of the Strategic Action Plan.
Margaret E. Umoh (Mrs.)
Director (Information & Public Relations Unit)
FMWR