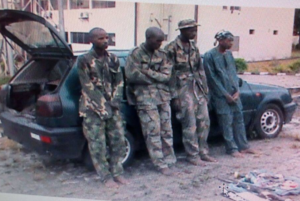 In view of the increasing spate of kidnapping in Kogi State, the Service has intensified efforts towards curtailing this threat. As such, within the last six (6) weeks, the Command had arrested about ten (10) suspected kidnappers, most of whom have been charged to Court.

Recently, along Abuja-Lokoja highway, Koton-Karfe, Kogi LGA, a gang of robbers/kidnappers was arrested by the operatives of the Service following liaison report corroborated by signal intelligence linking them to robbery and kidnapping activities within and outside the State. Members of this gang who operated in Military combat uniforms are:- i. Haruna SALEH (aka AUTA) – Leader; ii. Kabiru SHAIBU; iii. Abdulmuminu ADAMU; and iv. Tukur SHUIABU.

However, during an on-the-spot search conducted on the suspects and their vehicle, the following items were recovered:-

Signal intelligence revealed that the group has links with other kidnap syndicate operating in FCT, Kaduna, Katsina and Niger States.

They admitted that from the Ramadan to time of arrest, they have conducted six (6) different robbery/kidnap operations alongside with two (2) other gang members. The locations include Minna-Kantogara road, Niger State, Mararaba-Jos road, Kaduna State, twice along Manufarshi road in Zaria, Kaduna State and twice along Jaji-Zaria road. They have disclosed their source of military uniforms and I have invited the appropriate service to join us in investigating this angle of the case.

Apart from what was recovered from them, they revealed that they have a cache of three (3) AK 47 and other weapons which they are cooperating towards their recovery. 6. Both signal and human intelligence indicate that disproportionate percentage of kidnappers in Kogi State come from outside the State. They exploit the physical geography and landforms as well as the route structure of the State. Kogi State is bordered by nine (9) States and the FCT and the gateway between the North and South. The terrain is rugged and it has both land and inland waterways exist and entry routes.

The Command will continue to collaborate with other security agencies by deploying her core competences to address the security challenges of Kogi State and the Country, taking advantage of the renewed zeal of the State Government in supporting and partnering with security agencies. The suspects will have their day in court soonest.