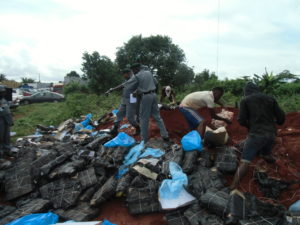 The Nigeria Customs Service (NCS), Federal Operations Unit (FOU) Zone ‘C’, Owerri has continued to effectively checkmate the excesses of smugglers of contraband goods in the country following the latest seizure of a total of 24,273 cartons of imported frozen poultry products with a Duty Paid Value (DPV) of #256,264,200.
In a press statement released by the Public Relations Officer of the Unit, Onuigbo Ifeoma, the Customs Area Controller, Comptroller Haruna Mamudu said that the items which were cleverly and deceitfully concealed in a Scania truck with an inscription ‘DHL’ were seized on the Benin axis in Edo State.
Haruna, who disclosed this while briefing newsmen at the Customs Warehouse in Benin said that the Duty Paid Value (DPV) of the items impounded stood at #256,264,200 just as three suspects were arrested by the eagle-eyed Customs men on duty in connection with the illegal business.
The Customs Comptroller, who spoke of the consequences usually associated with the consumption of foreign frozen poultry products preserved with chemicals meant for the preservation of dead bodies, regretted that a number of untimely deaths had occurred as a result of this.
He said that the NCS had continued to ensure maximum media publicity in respect of the dangers posed to human health by imported frozen poultry products and warned those still engrossed in the illicit business to desist forthwith in their own interest or face the full weight of the law.
Represented by the Deputy Comptroller in charge of Enforcement, Mr. Oladesu Shola regretted that while the Nigeria Customs had remained resolute, consistent and diligent in the war against smuggling, those involved in the unpatriotic act had continued to devise and perfect many plans to achieve their illegal ambitions.
He boasted that the NCS is now well fortified, better equipped, trained and transformed to deal decisively with smugglers wherever they operate with a superlative intelligence gathering system and unit.
He assured that those already in the Customs’ net would undergo a thorough investigation and if found culpable would be made to face the music accordingly.
“We are now talking of a change but regrettably these smugglers are not ready to embrace the change meant for the betterment of our country. We have no other country called ours and therefore, all hands must be to the pump to salvage it,” he said.
Ifeoma Onuigbo,
Public Relations Officer in Owerri,
The Nigeria Customs Service (NCS),
Federal Operations Unit (FOU) Zone ‘C’, Owerri
PRNigeria encourages institutions to be transparent in their information management as it provides news items from authoritative sources for free use by the media