Note: Benedict was/is one of the fearless journalists, Non-Indigenes and Non-Muslims who have remained in Maiduguri for many years reporting issues and developments from that axis objectively and responsibly. Those fine journalists, are rare, coveringsensitive issues in most difficult terrains. Benedict, didn’t die from terrorists/enemies’ attacks but by seeming ‘natural cause’. PRNigeria is very proud of them as we pray for the soul of the departed.-PRNigeria 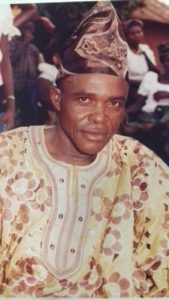 The treasurer of the Correspondents’ Chapel of the Nigerian Union of Journalists (NUJ), Borno State Council, Mr Benedict Aidokanya is dead.

Aged 59, Benedict slumped and passed away on Monday afternoon, August 1, 2016 near his house at Gomari Airport area in Maiduguri while attending to some family matters.

Until his death on Monday, he was the Borno State Correspondent of the Nigerian Pilot. He had worked in many media organizations including the Lagos-based news magazine;The News. He had been an official of the chapel in various capacities for about 13 years, his last position being the treasurer of the union.

He attended St Joseph Primary School, Effeye at Ipole and Community Secondary School, Ogboju at Otukpo Local Government of Benue State. He bagged a Diploma in Mass Communication at the Plateau School of Business Studies in the 80s and had attended several courses, trainings, workshops, seminars and conferences in news reporting and journalism in different parts of the country. He is regarded as one of the oldest members of the Correspondents’ Chapel having served in Borno for about 20 years.

His humility, calmness and promptness to official engagements have been acknowledged by members and many people that knew him. He is survived by three children and wife.  His remains have been deposited at the University of Maiduguri Teaching Hospital (UMTH) mortuary.

Burial arrangements to be announced later.