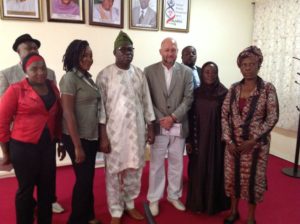 The Director-General of the National Biosafety Management Agency (NBMA), Dr. Rufus Ebegba has given assurance of the Agency’s continued collaboration with the Argentine government as part of efforts to enhance Biosafety Regulations in Nigeria.Dr. Rufus gave this assurance Monday when he played host to the Argentina Ambassador to Nigeria, Gustavo Dzugala who paid him a courtesy visit in his Abuja office.Ebegba disclosed that government was in the process of strengthening the Biosafety system in order to be able to harness the dividends of the modern biotechnology as well as to address concerns raised by some Nigerians on the safety of Genetically Modified Organisms (GMOs).According to him, government is very keen on diversification hence its readiness to make the necessary modifications to create the enabling environment for economic sustainability.He expressed the desire of the Agency to closely work with the Argentine government to foster the existing bilateral ties between the two countries. He further conveyed the Federal Government’s appreciation to the Argentine Envoy for his government’s willingness and pledged support to collaborate with the Agency in strengthening the Biosafety Regulations and the offer of capacity building through experts exchange programs.Earlier, the Argentine Ambassador, Gustavo Dzugala has said that he was in the Agency to seek ways of collaboration and sharing experiences on Biosafety legislation between Argentina and Nigeria. Dzugala noted that modern biotechnology have the capacity of enhancing the country’s economy especially when practiced in a safe method.He also said that the hues and cries against the adoption of GMOs is not peculiar to Nigeria but stressed that with the right legislation and best practices that the country stands to benefit immensely from the modern biotechnology. He added that with proper sensitization and enlightenment campaign on the processes adopted by the government to ensure safe adoption of GMOs in the country the people will be better informed and may gradually accept the safe adoption.According to the Envoy, the Argentine government is working with several other countries especially in areas of strengthening legislation and capacity building through experts exchange programs.He therefore pledged his country’s commitment to continue to partner with Nigeria in several sectors to deeper the bilateral relations between them. Ovuakporie EfeHead (Press)