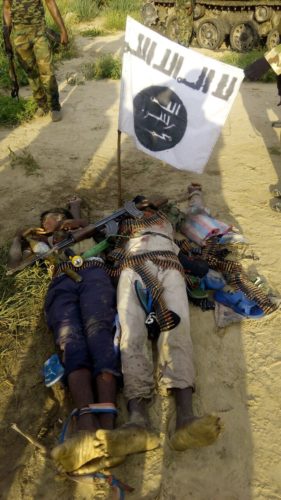 Troops on Operation LAFIYA DOLE stationed at Darul Jamel, on the fringes of Sambisa forest, northern parts of Borno State, yesterday evening successfully repelled an attempted attack on their location by remnants of Boko Haram terrorists.

The terrorists attempted to storm the troops location at about 10.00pm, but paid dearly as the troops killed several of them including two senior commanders that led the attack.

Prior to the attack, the troops of the same unit on routine patrol earlier, had cleared an ambush staged by elements of the suspected remnants of the terrorists desperate for food near Banki Junction.

It is equally believed that the attack and ambush might not be unconnected to the fact that the terrorists were desperately targeting over 890 rescued herdsmen with their 5000 livestock being held captives by terrorists along Nigerian borders with Cameroon.