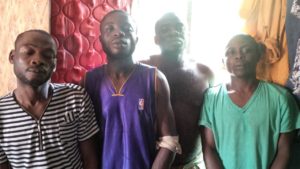 Police smashed Gang of Kidnappers of an Indian Expatriate Kidnapped In Katsina Ala, Benue State.

In continuation of the Nationwide coordinated operations against violent crimes such as kidnapping, armed robbery, cultism and the likes, the Inspector General of Police Ag. IGP Ibrahim K. Idris NPM, mni deployed Intelligent Response Team (IRT) to Benue state to tackle and resolve cases of kidnapping in the state using citizens supports and deployment of technical platforms. The intelligent Response Team (IRT) swung into action, trailed and arrested the following suspects:

During interrogation, they confessed to be behind several kidnappings and armed robbery attacks on innocent people in Benue State including the kidnap of an Indian expatriate, the kidnap of one Mr. Charles a business man at Adikpo, Kwande LGA and the kidnap of a prominent chief Tsegba in Gboko and the collection of a ransom of Five Million (5,000,000) naira ransom paid to them before his release.

They also confessed to the kidnappings of several lecturers and businessmen in College of Education Katsina Ala and other neighbouring towns. However, investigation is being intensified to arrest other members of the gang still at large. All suspects will be arraigned in court on completion of the investigation.

Members of the public are hereby advised to be vigilant and continue to partner with the Nigeria Police Force to ensure a crime free society.