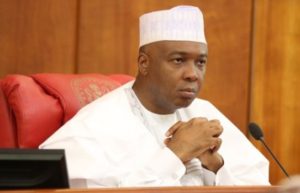 The Senate President, Senator Bukola Saraki today at plenary said that the Senate must do something drastic and quick to restore confidence back into the economy and get people investing and spending again. In his welcome speech to the Senators of the 8th Senate on their resumption from their annual recess noted that the collapse in oil prices from over $100 per barrel to about $48 recently meant the economy would experience serious challenges. However, according to him low sovereign savings have compounded the situation with foreign exchange reserves having declined from over $65bn in 2007 to about$30bn by 2015 and subsequently to $24.871bn on September 2016. According to the Senate President, referring to the report of the National Bureau of Statistics, the economy has drifted into recession and with GDP growth in the second quarter of 2016 at -2.06%following a decline of 0.36% in the first quarter, the economy has had consecutive quarters of economic contraction. The Senate President said that the response of the Senators to the current challenge must be dictated by the urgency of the hardship that the people suffer on a daily basis. He suggested an urgent debate on the way forward. He told his colleagues that in having such debate, they must resist the temptation of drowning the debate with apportioning blames that will neither bring solutions to the problem or reduce the cost of rice, maize or oil in the market. Rather he opined that the debate must be solution driven, people oriented and less political. The simple questions for the debate according to him must be: how do we tame the widespread hunger in the land? How do we save our businesses from collapse? and how do we save jobs for the majority and create even a little more? For the Senate President, ‘our people don’t care about our politics, they don’t care about our political affiliations, they don’t care if we are APC or PDP, north or south’ What they want according to Senator Saraki is for ‘ us to lead the way out of this crisis and deliver on the promises that we made to them’ The expectation of the President of the Senate is that by the time the debate is concluded, the Senators must have been able to make key actionable recommendations to the Executive on what they noted as the way forward in the immediate, mid term and long term solutions to the economic situation. Charles Akpan Head, Press and Public Relations