Home Government We Are Proud of Paralympics Team- FG 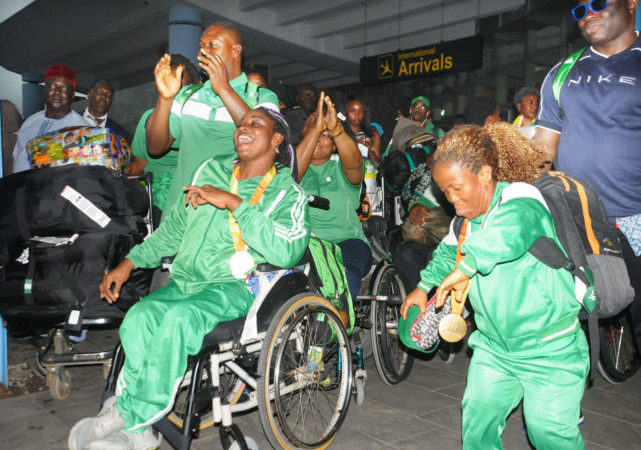 The Permanent Secretary, Federal Ministry of Youth and Sports Mr Chinyeaka Ohaa at the Nnamdi Azikwe International Airport Abuja yesterday, as head of official Delegation that welcome the second batch of Nigeria victorious Paralympics Team to RIO 2016 Paralympics Games paid glowing tributes to the special athletes; describing them as “worthy Ambassadors that brought glory to our fatherland more than any other team that had ever represented our country in previous tournaments.”
He also described the nostalgia experienced through their epic performance as indiscribable as Nigeria’s National Anthem was sung 8 different times at the Podium while its flag was flown 12 consecutive times to the admiration of sports loving people all over the world.
He also praised them for nobly adhering to the advice of Mr President who admonished them to compete fairly and cleanly; saying the feat achieved was due to committment, hardwork, determination and total focus.
He assured the athletes that appreciation of their efforts would not end in the settlement of all their claims and entitlements which had been paid by the ministry but promised that the Hon Minister of Youth and Sports Barr Solomon Dalung will in no distant future, at a befitting grand occasion lead them to our Sport-loving President.
Mr Ohaa assured them that they have left their imprint in the sand of times by being the best team in Africa at the 2016 Paralympics Games. He also gave kudos to their coaches and handlers for doing a good job.
Cultural troupes, musical orchestras and fans welcomed home the victorious sports heroes and heroines as well as their handlers.
Tolu Makinde
Director Press