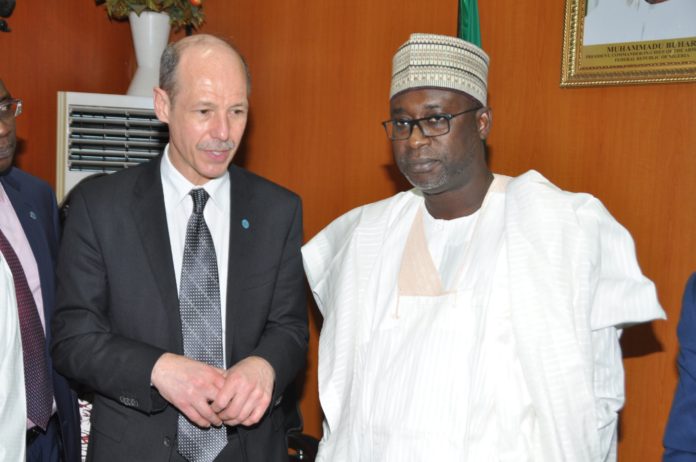 The Honourable Minister of Water Resources, Engr. Suleiman H. Adamu, FNSE has said that the completed Galma multipurpose dam in Kaduna State is capable of providing job opportunities for over 1.1 million people living within its environs.
The building of the dam started in 2006 and it has reached 100 percent completion. Adamu, who inspected the project on Thursday, October 14, 2016, said that apart from the irrigation component of the project, the multipurpose dam with a reservoir capacity of about 186 million m3 could also generate 2.2 megawatt of electricity and supply water to 2.2 million people in the surrounding communities up to the ancient city of zaria.
He commended the level of job done on the project and charged the company to facilitate the construction of the roads for easy access.
The minister had earlier commissioned the National Secretariat of the National
Water Resources Capacity Building in Kaduna.
He noted that the institute has played a significant role, especially in the collaborative research and capacity building in the sector.
“I am aware of the gait achievements of the institute since its establishment, I therefore want to challenge the Executive Director and  students of the institution to redouble their efforts in achieving its set goals in line with the agenda of the present administration,” he said.
Adamu promised the ministry’s support and as well encourage the institute in delivering on its mandate and ensure that its reputation is sustained. The centre was built in collaboration with the World Bank to address some specific needs of the sector.
The Executive Director of the Institute,  Dr. Emmanuel Adanu, said that the Institute has the mandate, to among others, promote and develop training courses, perform applied research, promote necessary codes of practice and cooperation with similar bodies within and outside the country as well as international bodies.
Continuing, Adanu said that the institute has enjoyed a tremendous support of the Minister of Water Resources since his assumption of duty. He added that in the current financial year, the budgetary allocation to the institute has tremendously increased, while patronage of its tailor-made short courses by the ministry and its departments has taken positive turn.
He appealed to the minister to encourage the ministry, departments, RBDAs as well as its agency to participate on the short and long term training programme of the institute and to expand and regularize the youth empowerment programmes. Attari M. Hope For: Director (Press) FMWR, Abuja.