….Promises to boost agriculture through all year round farming… 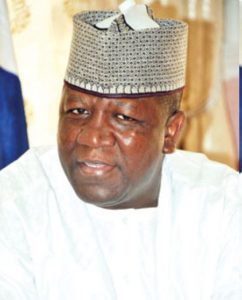 In its bid to expend the Graduates/Farmers Empowerment scheme in all the 109 Senatorial Districts of the country, the Federal Government has flagged off the Graduates/ Farmers Empowerment Scheme in the areas of crop production in Bakolori Irrigation Project, TalataMafara, Zamfara State making it the third scheme to be flagged off in the country so far.
At the flag off on Tuesday 11th October, 2016, the Honourable Minister of Water Resources, Engr. Suleiman H. Adamu, FNSE stated that the scheme is another milestone in government’s effort to revitalize the River Basins Development Authorities which were established with the view of boosting agricultural production in the country.
The Minister who was represented by the Permanent Secretary of the ministry, Mrs. Rabi S. Jimeta, mni said that the Buhari administration is committed to revitalizing the economy through all year round farming with the nation irrigation facilities.
According to him, the country is blessed with 3.12 million hectares of potential irrigable land and only less than 10% has been fully developed. Speaking further, he stated that BakoloriDam has potentials of 23,000 hectares and only about 8000 is currently utilized.
Adamu disclosed that under the 2016-2030 roadmap of the ministry, the country has the potential to develop about 500,000 hectares through direct government intervention and development of another 1 million hectares by large scale commercial farmers.
He appealed to all levels of Government within the beneficiary localities of the scheme to provide maximum support to this significant Government investment through active participation in the operation, maintenance and management of the schemes.
The Managing-Director, Sokoto Rima River Basin Development Authority, Alhaji Muhtar Ahmad Anka said that the Basin has helped in the development of agriculture, water supply and social-economic development in four states namely, kebbi, Katsina, Sokoto and Zamfara.
He commended the Ministry for its effort in repositioning the River Basins for effective service delivery. He stated that the scheme is one of the ways the River Basins can contribute their own quota to achieving sufficient food supply for the nation.
He added that the Basin Intends to revamp fisheries, horticulture and livestock production with the support of private investors to meet up with the demand.
Speaking at the event, the Project Coordinator, Transforming Irrigation Management in Nigeria (TRIMING), Engr. Peter Manjuk said that the World Bank through the Ministry of Water Resources is supporting irrigation development in six states of the federation.
He stated that Zamfara state is lucky to be the first state to benefit from the project with about 5,300 hectares of irrigable land identified and with potentials of about 14,000 hectares
Mr. Attari M. Hope
For: Director (Press)
FMWR