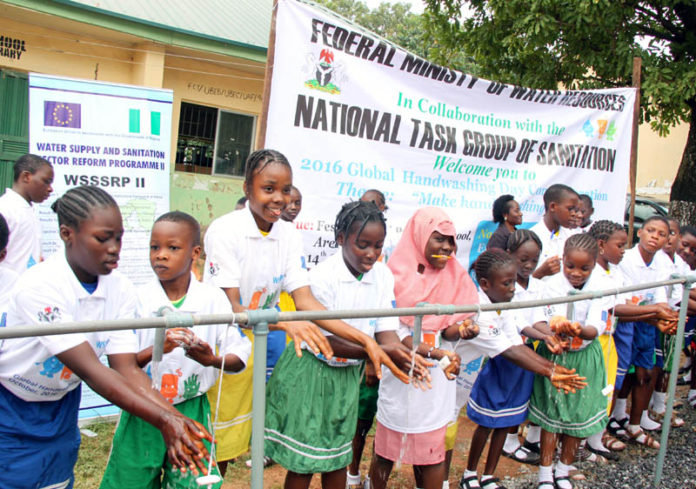 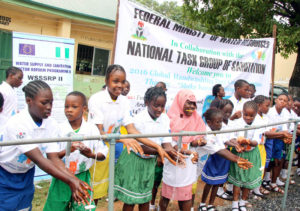 In its determination to create awareness on the importance of hand washing with soap as the most effective and inexpensive ways to prevent diarrheal, cholera, pneumonia and save lives, the Federal Government has commemorated the 2016 Global Hand washing day with the theme “make hand washing a habit” at Festival Road Primary School, Area 10 Garki, Abuja.
Speaking at the event, the Hon. Minister of Water Resources, Engr. Suleiman H. Adamu FNSE represented by the Permanent Secretary in the Ministry, Mrs. Rabi S. Jimeta mni said that the Ministry is addressing the low level of access to water, sanitation and hygiene in the country especially in the rural areas. The Ministry is equally rolling out a programme called the Partnership for Expanded Water, Sanitation and Hygiene (PEWASH) which will be implemented with the involvement of all stakeholders in the sector from the National to the Sub-National and Community levels.
According to the Minister, the National Task Group on Sanitation (NTGS), a coordinating body of organizations working in the water and sanitation sector had planned different activities to commemorate this year’s Global Hand washing Day which include Media Briefing, training of Hygiene Education Teachers, Youth Corps Members and other stakeholders across the 6 Area Councils of the FCT on hygiene promotion with the desire to take the campaign beyond the commemoration day and an event in Lagos on October 15, (the day set aside by the United Nations General Assembly to foster a global and local culture of  hand washing with soap and raise awareness on the benefits of the practice) in partnership with Concern Universal and PZ Cussons.
He expressed his optimism that the efforts of the Federal Government of Nigeria and all key relevant stakeholders to raise awareness, advocate for more attention to hygiene promotion leading to behavioral change, would produce a disease free society and economically buoyant nation.
Chris Ugwuegbulam
For: Director (Press)
Federal Ministry of Water Resources