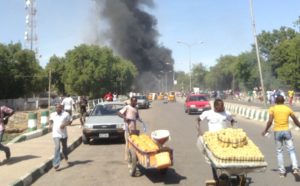 Suicide bombers are suspected to have detonated bombs along Maiduguri Damboa road in the fringes of the metropolis.

As the security and response agencies moved to the two scenes of the explosions, PRNigeria gathered that 9 dead bodies and 24 injured victims have been recorded so far.

The Spokesperson of National Emergency Management Agency ( NEMA) in Maiduguri, Abdulkadir Ibrahim only confirmed the efforts of rescue and health workers in the evacuation of wounded victims to Hospitals for treatment while the dead bodies have been deposited in the mortuary.