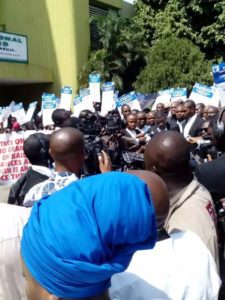 .. Ask US, UK, UN to call FG to order on abuse of rule of law
Constitutional lawyers and human rights activists from various parts of the country have staged a protest in Abuja against the continued detention of former National Security Adviser (NSA), Mohammed Sambo Dasuki (rtd) and others in spite the court bails granted them.
They flayed the executive arm of the federal government for attempting to derail the rule of law and democracy with utter disregard to valid and lawful court decision.
The protesters made copious reference to the ECOWAS Court of Justice which ordered the release of Dasuki since last month but yet to be honoured by the government of President Muhammadu Buhari.
The lawyers also accused the executive arm of government of mistaking persecution for prosecution insisting that any government or agency not obeying valid court order cannot claim to be prosecuting offenders but persecuting the alleged offenders.
The group also passed a vote of confidence on the National Judicial Council over the matured manner and clear terms the council has been handling the invasion of the houses of two Supreme Court Justices and five other cadres by the operatives of the Department of Security Service (DSS).
The legal practitioners, who claimed that the unconstitutional ways and manners the judges were arrested was a threat to democracy appealed to the United Nations, United Kingdom, United States of America and the Amnesty International to call the Federal Government to order and to stop disobedience to the rule of law.
The lawyers,’ operating under the aegis of “Lawyers in Defence of Democracy” and the human right activists operating under the name “Citizens for Good Governance”, jointly accused the executive arm of government of plotting to overthrow the judiciary so as to enthrone abuse of human rights and subversion of the rule of law.
During rallies staged at the Federal High Court headquarters, Federal Ministry of Justice and the National Human Rights Commission, the legal practitioners and human rights activists noted with regret that Nigeria is drifting to a dictatorship that may derail democracy and the yearnings and aspirations of the Nigerian citizens.
Spokesperson for the aggrieved lawyers, Barrister Ikenga Imo Ugochinyere, said that the executive arm under the guise of fighting corruption had debased the 1999 constitution and violating the provisions of the supreme law with impunity. He appealed to the international community to take interest in the ugly trend and call those in authority to order.
The lawyers who carried placards with various inscriptions condemned the method adopted in arresting the judges insisting that the ploy was aimed at intimidating and harassing judicial officers to do the bidding of the executive arm.
They claimed that the government that has become notorious for disregarding court orders and judgments cannot be taken serious and cannot be believed to be acting in good faith with its claim of invading the judges’ houses to fight corruption.
Specifically, the lawyers noted with concern that several Nigerians accused of corruptions, charged to court and granted bail by courts because they are entitled to bails are still languishing in the custody of the DSS in utter disregard to the lawful court orders.
Among Nigerians said to have been granted bail but still been held by the same DSS are former National Security Adviser, Col. Sambo Dasuki, Mr. Nnamdi Kanu and Air Marshall Umar Mohammed, adding that with the antecedents of the government and the DSS, the future of Nigeria’s democracy could be jeopardized.
“The invasion of the judiciary is a threat to justice and democracy and anything that violates section 158 of the 1999 constitution as amended must be resisted and defeated. We urge Nigerians not to allow any warped sting operation against marked judges who are not doing the biddings of the executive arm of government and the DSS to sail through.
“How come nobody has called for the DSS to step aside from judicial prosecution until they have obeyed all courts judgment against the agency?
“We unanimously pass a vote of confidence on the National Judicial Council and the decision taken not to suspend the judges until due process of the law is followed and prima facie case of corruption established against the affected judges.
“While we commend the NJC for defending the independence of the Judiciary, the sanctity of democracy and the rule of law and sanctioning judges who abused their offices, we urge NJC to compile the list of government agencies and security agencies that are disobeying court orders and direct courts not to hear cases from such bodies until all outstanding court orders are obeyed.
“Deciding to ignore judgment that are not in your favour and implementing ones that protects your interests are clear signs of an emerging dictatorship’
The spokesperson further said that the DSS onslaught against justices Sylvester Ngwuta, John Inyang Okoro, Adeniyi Ademola, Nnamdi Dimgba and M.I Liman were revenge operations and not a fight against corruption, adding that the offence of Justice Ngwuta was his lead judgment in the Ekiti Governorship election which the ruling party wanted at all cost.
Ugochinyere also stated that Justice Ademola ran into trouble when he granted bail in the case of Sambo Dsuki, Nnamdi Kanu and his decision or ruling in the president’s Muhammadu Buhari certificate saga and the order made against the Attorney-General of the Federation, Abubakar Malami SAN, when Malami misbehaved in Kano.
In the case of Justice Dimgba, the lawyers claimed that the judge ran into trouble with DSS when he ruled that he will not hear any application by the DSS until they obey all his earlier orders that declared the detention of former Chief of the Air Staff, Air Marshall Umar Mohammed as unlawful and ordered his release.
They therefore called on the NJC and the Chief Justice of Nigeria, Justice Mahmood Mohammed to direct courts in the country not to hear any application from DSS and other agencies in the matter of Dasuki and others until they obey all pending court orders against them.
By PRNigeria